Greetings from your erstwhile Porterdale correspondent, this time reporting from the Office of US Citizenship and Immigration Services off of Lavista Road just inside 285. I'm here covering the swearing in of a few hundred new US citizens but particularly one, my daughter-in-law Olga Melnikova. She came to this country from Russia in 2001, not because she was fleeing poverty, persecution or violence, but for a visit. She stayed for the freedom to pursue the American dream.


One has to get up early in the morning to become an American citizen the hard way. Olga is to be there at 8 a.m., so my son Jackson, Olga and I head out at 7:15. We get there plenty early, a good thing since seats for friends and family are soon gone.


Olga gets in line with the other citizenship seekers. It takes until 9:30 for the onlookers to be invited in to see the swearing-in. Meanwhile Jack dozes in and out while I read seventy five pages of War and “Peace.”


Here is Olga taking the oath of citizenship. 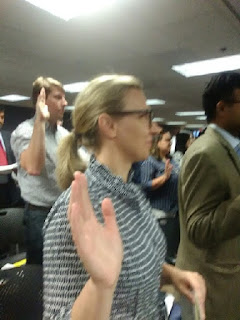 She and the others swear to “entirely renounce and abjure all allegiance and fidelity to any foreign prince, potentate, state, or sovereignty of whom or which I have heretofore been a subject or citizen,” particularly striking since she now has dual citizenship and her new president professes to believe her old one over his own national security advisers.


Here are some of the other new Americans taking the same oath... 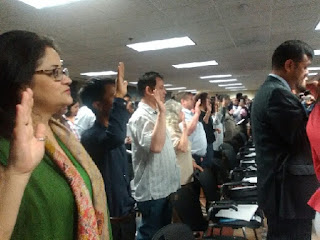 ...wherein they pledged to take up arms in defense of their new country when required. Then they pledge allegiance to the flag. When they are declared US citizens there is a loud cheer and a collective lump in throat.


Next comes a Trumpian nightmare. They register to vote. 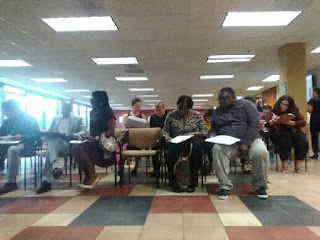 Afterward we celebrate with excellent Indian food at Zyka on Scott Boulevard. I suspect that none of our food purveyors were born here. 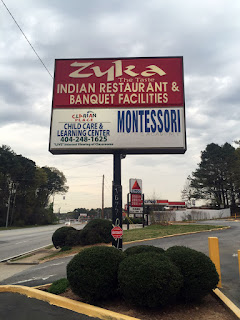