[Perrin Lovett] - Only A Dictator Can Save America

Happy Independence Day and/or Week, Heritage Crew! Two hundred-forty-three years ago, our forebears began a nearly insurmountable struggle to throw off the rule of (what some of them deemed) a Tyrant. Today, their Descendants are in need of another.
In last year’s column, we examined some of the historical curiosities leading up to 1776 and their aftermath, briefly flipping through the long decline, and finishing with a look towards the looming future. Here, I thought it might be nice to explore any chance of a reprieve, however unlikely, and a return to some earlier, more AMERICAN version of America. (I’d pick the period of the Confederation (1781 - 1789), or, if that’s not possible, of the Republic (1789 - 1861)).
In 1789, the free People of the Sovereign States committed an error in birthing a strong central government. It proved too powerful, arresting the independence of the States during the early 1860s, and totally subjugating them in 1913. At some point during the early Twentieth Century, the American Empire morphed into the United States Empire. That latter polity, under which we currently suffer, nears its predictable end; it currently collapses at free fall speed. Even now, wicked, useless elites scramble to suck out what value remains, while their scavenger hordes descend upon the rotting shell. 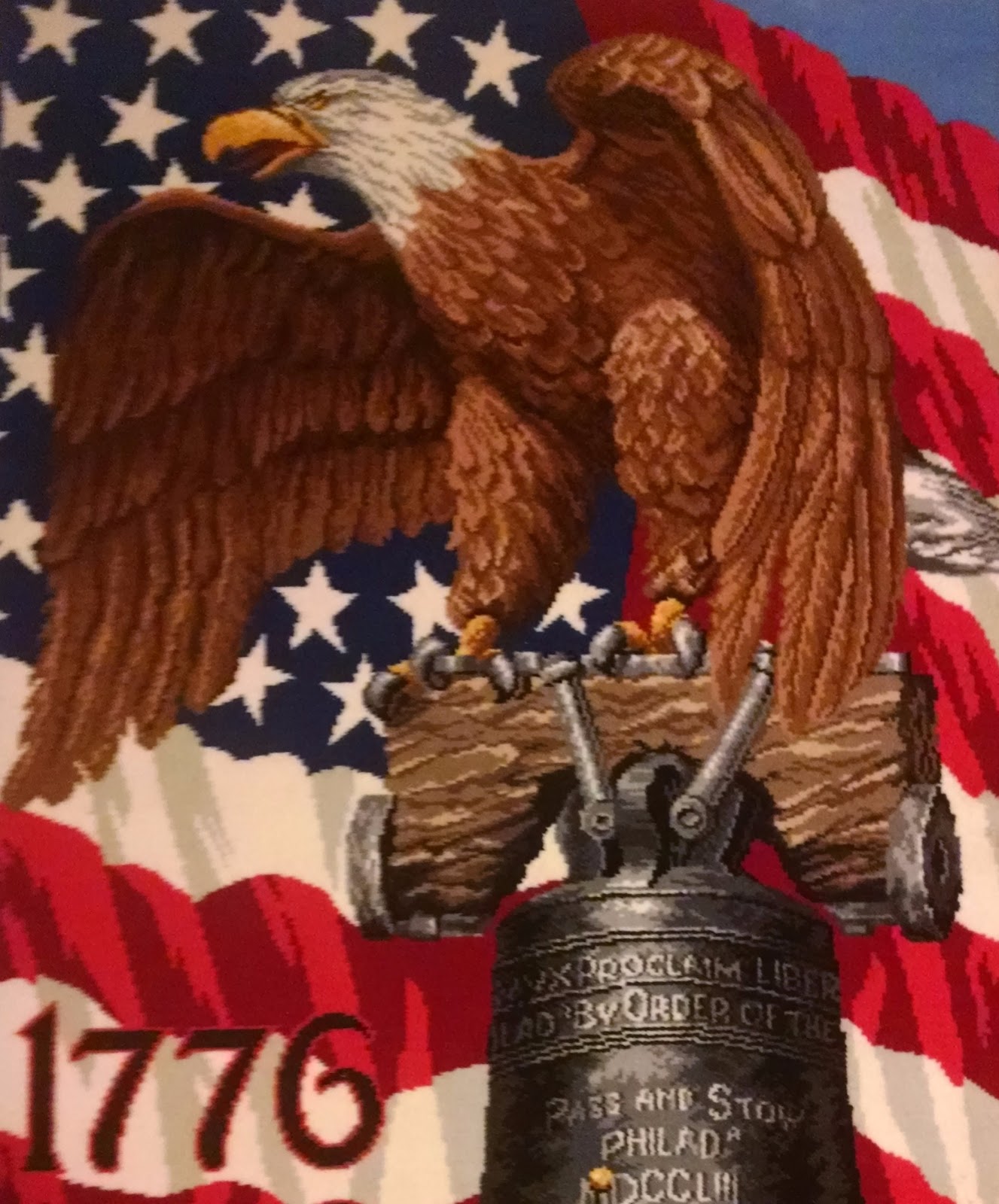 Perrin’s so-cool Bicentennial Wall Rug of Freedom by Ethan Allen (yeah, same pic from last year).
From either a theoretical or a practical point of view, all practical politics are now practically worthless. Next year, you might have heard, brings another pointless national election. Although apparently the best the system can generate, Donald Trump is as much a failure as his recent modern predecessors. He just Tweets more. The circus freaks offered up by the rival Democrats are so ridiculous as to negate any mention by name. The Parties and their representatives are broken, as is the majority of the population, too weak and stupid at this point to bother with trivial reality.
The reality is that there are too many problems, the worst not even of the purely political persuasion. Yet, assorted fools would persuade us that government (and the Republicrats) holds the answers to those problems, both the ones it cannot control and the ones that it created. Worst of all, we are expected to vote along with what Einstein best described as the definition of insanity.
The Empire cannot positively affect the moral decline of the people. It cannot do much to arrest the decline in public health, both mental and physical. And, it will not do anything about the demographic calamity, the usury racket, the wars, or the eviscerated Rights of Englishmen - if it were going to do something, it would have already done so. Rather, it’s done for.
No. Only a strong man of action, completely unfettered to act as necessary will do. Yes, this option is absolutely fraught with danger and an unbelievable long-shot. Congratulations, that is where we have allowed ourselves to drift - to the point where we can only hope for a Cincinnatus while knowing we’re much more likely to get a Ceasar or a Commodus. Or a Mugabe.
The precedent, as with much of our legal framework, hails from ancient Rome. In Rome, when things slipped into a total disaster and general political mechanisms were either ineffective or counterproductive, a dictator would be recruited to “save the day,” with the high hopes that he would eventually lay down the power, normalcy restored. The odds are, if a dictator could be found (I question if we even have a candidate), for purposes of the ancient terminological sense, he would immediately degenerate into what is commonly understood as the modern sense.
This idea is almost certainly guaranteed to fail. However, as is, the current situation is completely guaranteed to fail - a mathematical certainty. When (not if) it does, and we’re operating on a maximum ten to fifteen-year timeframe, if we’re lucky, then what follows will be horrendous, with predicted losses of cultural revolution magnitude. When that happens, out of it will come new states, some of them possibly Western and civilized. So, in the end, there is a chance something can be salvaged after a period of violence and burning. If that’s the best case scenario (and the one certain), then why not chance it, or hope to, now? Laziness and ignorance, most likely.
I know you’re busy celebrating all those freedoms you cherish - freedom to keep all your earned money, freedom to travel without “papers,” freedom to mind your own business without mollifying a multitude of idiot busybodies, freedom to carry any weapon anywhere you like, freedom to use your land as you see fit, freedom to know your people and your culture aren’t being ruthlessly shoved aside to make room and largess for NOT-Americans, freedom to hold money knowing its value doesn’t decline by the day, freedom to let your daughter use the public restroom without fear that the new “love” lurks inside, and so on. If you get a chance, please bring up the above at your bar-be-ques, military worship ceremonies, screen-staring contests, thug jamz, or monster truck rallies. To the sober people, not the comatose...