Sweet Petunia Blues Festival in Porterdale Today From 12 to 7PM

Kicking off at 12 noon today at the Historic Porter Gymnasium will be the Sweet Petunia Blues Festival, a celebration of Oxford native & Piedmont Blueswoman Cora Mae Bryant. Ms. Cora was a highly regarded musician & singer & was the daughter of famed Bluesman Curly Weaver who played with Blind Willie McTell back in the day. 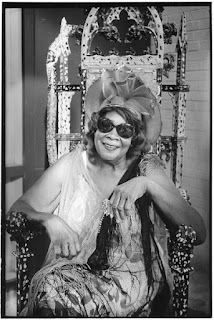 From the press release:

"The blues festival will be held in Porterdale on May 19th at the downtown open-air gym.
The festival is to honor the memory of Cora Mae Bryant, a blues vocalist and musician from
Newton County whose stage name was Sweet Petunia.  Her son, Tony Bryant, has organized a
dozen blues groups to perform from 12:00 noon to 7:00 p.m. and features a special appearance
by Tony Bryant and his blues band.

Cora Mae’s father and Tony’s grandfather was Curley Weaver, a blues musician from Newton County
who grew up near Porterdale.  Curley did duets with Blind Willie McTell, who wrote the song
“Statesboro Blues” covered by The Allman Brothers Band in the early 1970s.  The famous blues
club in Atlanta on Highland Ave. is named for Blind Willie.

The open-air gym is a great venue in downtown Porterdale.  The large old cotton mill along the
South River is now loft apartments.  There are stores, restaurants, and bars nearby.
The gym has a covered stage—attendees are asked to bring folding chairs.  Attendees can go in and
out of the event after being stamped so they can walk around downtown, visit the stores,
restaurants, and bars downtown, and view the South River dam and shoals nearby.

Fatt Matt’s Rib Shack, another famous blues venue in Atlanta, is providing barbecue for sale.
Beer and wine will also be for sale inside the venue.  This should really be a great time for all.
Many  modern British and American bands were heavily influenced by the blues, including
The Rolling Stones, Cream (Eric Clapton’s band), Led Zeppelin, The Jimmy Hendrix Experience,
and The Allman Brothers Band—to name just a few.

Admission is only eight dollars—a great deal for a music festival in these days of sky-high live
music ticket prices.

We hope to see you there. Remember to bring your folding chairs."


This should be a great event down in the lovely mill village.