Last Summer I set out to do an investigative piece on Porterdale businesses. I went to every downtown business except the dance studio which wasn't open when I did my canvassing. My method was to give them a simple questionnaire to return to me by text.

Two businesses answered my questions on the spot, Milazzo's and the kayak store. The rest of the businesses apparently have no need of more business because none of them returned the questionnaire.

(Seriously, I must have been doing something wrong. Let's look at it from the business owners perspective....

A slovenly unshaven old man comes in unannounced to tell you he's giving you free advertising in a publication you've never heard of. There must be a catch. He wants you to answer a questionnaire, but does he have a questionnaire? No, the geezer starts writing questions in a raggedy composition notebook.)

Christina Millazzo, owner of Millazzo's Ristorante, who does know both me and TPC said there's nothing she doesn't like about Porterdale. If you know anything about fine dining east of Atlanta, there's no need to tell you what she sells. 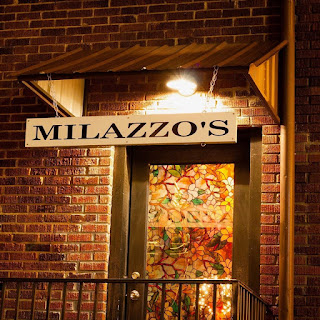 Ryan Roth, the personable young man who runs the kayak shop, took time to write the following for me.

“Nomadic Flow Outfitters is Atlanta’s premier paddlesports retailer! We handle everything paddlesports related. We provide a full retail store carrying the best gear in the industry as well as offering kayak/ paddle board rentals, shuttle services, kayaking lessons and guided tours. So whether you are looking to start kayaking or a seasoned expert we have the gear and adventures right for you. Hours Wednesday- Friday 11 a.m.- 8 p.m.. Saturday 10 a.m.- 8 p.m.. Sunday 1 p.m.- 6 p.m..”

As to Porterdale, he says that in two years Porterdale will be the new Little Five Points. This interests me. Let's think about it.

Thirty years ago when I first came to Porterdale I had never seen people living in such squalor. and I had worked six months for DFACS in Fannin County, part of Lyndon Johnson's Appalachian poverty belt, visiting its poorest residents.

Some lived without electricity or running water. After visiting one house, the barefoot teenaged girl who answered the door had had her mother deliver me a message proposing marriage and telling me’ you are the purtest [sic] man I ever laid my eyes on.’ I wish I had saved it.

Porterdale now as compared to then is Fifth Avenue, But Little Five Points? I decided to ask the mayor.

Arlene said it was a possibility, that big things were about to happen. She couldn't tell me now but agreed that when it came down I could break that news in the Piedmont Chronicles.

Ellis is a recovering Attorney but has worn many hats over the years: father, bus boy, stand-up comedian, novelist, wiffle ball player, rock'n'roll band manager, and at one time wrote a popular and funny column for The Covington News. A Fannin Co. mountain boy originally, Mr. Millsaps now stays at the mill village of Porterdale by way of 20 years in Mansfield. Usually funny and at times irreverent and subversive, he leans left in his political philosophy but can always be counted on for a pretty darn good write-up. The Chronicles are proud to have him involved...
Posted by MBM at 3:54 PM