Our topics of discussion, in this here column, of late, have been just a little heavy. For that, I do not apologize. Regardless of their ardent unpopularity among the general population, I kind of like freedom and truth. Matters of geopolitics, religion, economics, Satanic globalism, cultural decay, academic collapse, terrorism, war, and the very survival of Western Civilization are all worthy of intelligent consideration. And, if the approach is, or has to be, a little zealous, then so be it.
I recall Barry Goldwater’s eternal words of vitriolic courage, “...that extremism in the defense of liberty is no vice!”
But … not today. Today, in order to honor the real people out there (the “peeps,” as they call themselves) I cast forth the wide net, the drag net. Dredging the very bottom as it were. I owe my inspiration to a heart-warming family social media story I almost read last week. My drive I owe to a gaggle of teenage girls who, yesterday, forced me at gunpoint into a large, cool, hip, and very trendy Amerikan mall. It was, for them, a fantastic way to spend an afternoon, excused from schooling. For me, it was a fine, educational vacation day.
“Mauled at the mall,” I might normally call it. But, this time, I undertook a deep exploration of the culture on its home turf. Like a visitor from another planet, I stumbled about, awe-struck by the … um … the spectacle.

Tamper’s Plaza Internationale. Picture by Perrin.
In general, this mall (in the daytime, at least) was inhabited by three main classes, all of whom were heavily tattooed, deep in their “screens,” and maybe a little off upstairs. First, there were a lot of golden oldies. Next, there was large, vibrant, diverse, and swishy representation of … alternative people. Lastly, and mostly, there was a 225,000 ton cruise ship load of smokin’ hot, sweet n’ spicy hot hotties. I mean just loveliness incarnate. The later group helped with my motivation.
Also present was a lost man in a suit, a sleeping security guard, some weirdo with a lobster hat, assorted chillins, and the Easter Bunny. All this, and the time I had to kill, led me across the street to the Davidoff Lounge.
I mean it all reminded me of the aforementioned social media drama. It seems that Cole and Savannah (whoever the hell they are) made some Twitter-bots powerful angry with a little cigar … er … April fool’s smoke. Prank. The resident Youturd attention whores angered 5 million other idiots when they informed their ankle-biter dog, whom they dress like a streetwalker, that they were forced to give away the little Davidoff. Girl. Daughter’s maduro wrapper. Daughter dog.
Ughhhahhhhhhh! THE HELL WITH IT!!!
***EMERGENCY CIGAR INTERLUDE***
Yes, I spent most of my cultural anthropology time in a cigar shop. There I thought about many things, least among them the ridiculous state of American society. (There were better topics - mini cocktail dresses, for example). So enraptured was I, that I didn’t have the presence of mind to snap any illustrative photographs. In fact, I can’t recall, precisely, what I smoked. It was a Perdomo. Something like unto the following, but not quite:

Cabinets are back, baby! Pic by Perrin.
Of late - and I’ve been meaning to do a little ensayo sobre fumar, just haven’t gotten to it - I’ve also enjoyed one of mi hombre Nestor Mirada’s best smokes ever. This gem:

Happy Seventy-Fifth, buddy! Let’s aim to double that count. Pic, again, by Perrin.
Right now, I’m wrapping this one up with the delightful accompaniment of a Punch Rare Corojo. Or, is it a JFR something? Well, it is something. There’s also beer involved. I’m on vacation.
That’s about it. Our culture, what passes for one, is strange. But, we have cigars, at least until such time as Ivanka cries about something or Daddy thinks Robustos speed up rifle fire rates. Go ahead and like and share and fame whore this article all over Twitbook, Facetube, and Instachat. Make sure they have your exact location, your routing numbers, and your children’s identities and daily itineraries. Make it easy for them.
A Parting Note: I’ve sensed more than read, here at TPC, these past few weeks, a growing interest in or concern about the coming GREAT QUADRENNIAL BLACK MASS (2020 Presidential Election). I’ll probably be along soon with my take on the situation and, especially, on the contenders. In addition to Mr. Bump Stock Ban, there’s Mitten’s primary threat. Um, surfer girl. We have, like the mall, a Butt-guy in the mix. Boothead Man will surely return. The preview summary: Trump wins reelection handily and, then, things will continue to slide towards 2033. More on that later. My bottle’s getting light.
Today’s CF Floyd National Affairs Column
was (kind of) brought to you courtesy of
Davidoff of Geneva since 1911 - TAMPA
and the
Corona Cigar Company 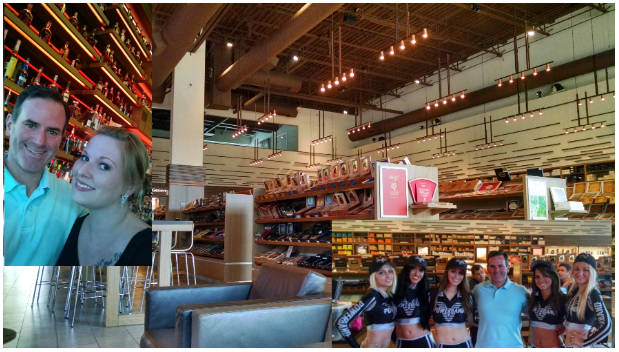