[Perrin Lovett] - From the International Desk: The Christchurch Mosque Shooting

When I first heard of the incident at the Al Noor Mosque in New Zealand, my first thought was, “false flag.” The why has to be one or more of three things. One, gun control. Two, fomenting more war in the Middle East, most likely with Iran. Three, to rally more “refugees” into NZ and the West. Someone always wants more war. And, if they can excite Muslims into retaliation and then blame Iran for it, so much the better. Prime Minister Jacinda Ardern wants diversity in New Zealand. Period. (She also wants more sodomy, more abortion, and more socialism - go figure). The gun control was a given and is already playing out.


And, no Cletus, “false flag” does not equal “nothing happened.” There were real bullets, real people, and real blood. I know.


I watched the original 17-minute video. I will not link to it nor explain how to find it on the dark web. It’s out there. Most people probably should not partake, though they’ve likely seen far worse “entertainment” from Hellywood. However, I would suggest some of you should watch it. I give two and a half reasons why.


First, if you search for it on Google, you won’t find it. And, some of the first articles that come up are about why you shouldn’t watch it.

If the enemy doesn’t want you to do something, that means you should at least consider it.


Second, if you’ve never seen anything like this, then you need to. There’s going to be a lot more of it in the future. A. Lot. More.


Lastly, if you’re in the military or law enforcement, or if you have tactical interests, then you might assess for yourself what gunman Tarrant was doing. What I got for my 17 minutes was a mixed bag but it reinforced my initial thoughts.


Tarrant was not an amateur. He had training. He may have had some experience too. How much and what kind and where he obtained it are all open matters (not being mentioned by the police, the media, or pretty much anyone else). The man was off the radar for years, traveling to nefarious places where violence and violent actors abound. He looks like SAS. By odd luck … NZSAS was operating within ten miles of Christchurch at the time of the shooting. He’s not one of them but he could be somehow associated with them or a similar outfit.


I’d rate him as moderately well trained, if not well rehearsed. He moved and operated like an infantry soldier who’d been through basic and also covered fire-squad tactics somewhere. He was not (only) video game trained. If he had ever participated in live-action before, then he’s rusty.


Tarrant is cool, calm, and almost totally collected. He was ready, mentally, physically, and equipment-wise. When he arrived he loaded up and went to work - shotgun for entry, rifle work inside. His shooting was very good, especially considering the circumstances - most were either single shots or short bursts. He hit the targets the first time. He only unloaded multiple shoots on mass groupings. He efficiently double-tapped. He semi-efficiently stalked and cleared. He circled to intercept runners. He hit moving targets, at a decent distance, while moving himself. His mistakes were several. Most notably, he fumbled magazines and even dropped one. He took his time at intervals.


Back outside, departing, he made a wounding shot at a fair distance, against a moving target. He smoothly turned the wounding to a kill and kept moving. Once back in the car, he was calm, even jovial. He counted off his mistakes, kind of like, “oh well, live and learn, right?” On the escape route he was simultaneously driving, talking, listening to music, and shooting through the windshield. 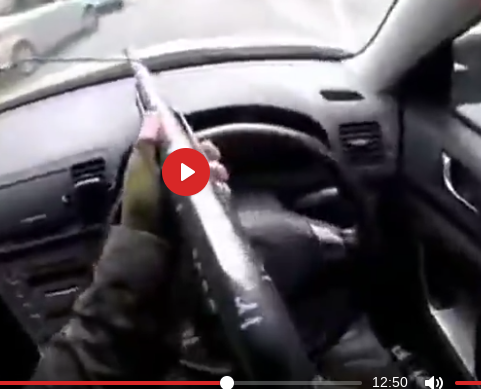 When he shot through the front glass, he hit the target. That caught my eye. That’s not normal crazy or criminal behavior. That’s special shooting, the kind they teach some LEOs, Secret Service, CIA, SAS, or Mossad. I reviewed the above with a retired Army Colonel. He was hesitant to endorse any level of expertise though he found the performance efficient and alarming.


Another reason to watch the nearly unwatchable - preppers take note - is that this video is a classroom exercise both on conducting and on surviving a mass shooting. Also of note is that Tarrant took no action, beyond blowing the horn, at locals, even those shuffling across his path.


Tarrant’s manifesto is a piece of work. They’ve already killed the copy I had previously linked to on my blog. You’ll have to search the Chans for that. Most white supremacist, far right types aren’t into communism nor eco-fascism. Tarrant was. What a convenient (and predictable) narrative we’ve been fed, one that totally omits Tarrant’s anti-Jihad revenge motive and the Islamic terrorism previously plotted within the subject NZ mosque. In their defense, as pretty as it is, New Zealand is still Dar al-Harab.


Ardern wasted no time in announcing a ban on assault rifles. Her executive actions, to my knowledge, have not yet been followed up legislatively. I think the plan is to severely limit access to “Class E” weapons (ARs and AKs).


The rub is that, just as in America, New Zealand has no major gun crime problem, certainly not with Class E arms. The Prime Minister estimates there are around 1.5 million guns in NZ. Most are not of the “assault” variety. Hosting demographics similar to America’s a generation ago, NZ ranks as one of the safest countries in the world, with nearly no gun crime. (Christchurch’s peoplescape resembles America, pre-1965). In 2018, the entire country only recorded 35 murders. Of the 35, odds are only a portion were committed with guns. It’s highly likely that none were committed with “assault” weapons. It’s also safe to assume that, just as in the U.S., guns save more Kiwi lives than they take each year.


But, hey, the facts don’t matter when constituents operate on emotions and there’s an agenda at work. Fewer freedoms and defensive weapons for the home team and more foreign invaders is what they need to stretch the Long White Cloud just a bit thinner.


As the gun control was immediately predictable, so too was the diversity in-fighting. Ardern is kowtowing to the Mohammedans like there’s no tomorrow. Local Jews and Muslims came together to fight the curse that is white supremacism, communism, PewDiePie-ism, and eco-terrorism (I made some of that up…). Then, Mosque honcho Ahmed Bhamji had to get all anti-Semitic: “I stand here and I say I have a very very strong suspicion that there's some group behind him and I am not afraid to say I feel Mossad is behind this.” That’s his way of saying it was a false flag, with a specific interest group as the culprit. The Jews, you might guess, were not pleased.


One wonders why all the newly-arrived, yet somehow eternally-oppressed types stay when and where things are so very bad. Why not simply leave Footrot Flats to the On the Beach(ers)? Then again, it’s a strong narrative. How bizarre.

I’m out of Middle Earth puns so we’ll wrap this up. World, however many iterations of the official story we’ve already been through, don’t trust it. Americans, we have the same problems with incompatibility and globalist control lust here, except they are an order of magnitude worse than the Kiwis’. Gun grabs don’t work as well in America but the grabbers never give up. Just ask the bump stock guys.
Posted by MBM at 3:48 PM