[Perrin Lovett] - A Week of Miracles: Paris Out of the Ashes; Tiger Roars Again at Augusta & Perrin Storms C-Town

This column addresses three topics of great importance, in reverse chronological order. The originally intended subject comes last, after two of perhaps greater relevance and general interest. This is good stuff (great, even); read on:
International Desk: Only the Building Burned. The Church is Adamant, the French Spirit Indomitable.
You’ve heard the news. The world knows. Paris’s landmark, 850-year-old Notre Dame Cathedral suffered extensive fire damage on Monday, April 15th.
I learned of the tragedy while, of all things, leading a discussion en Français with a group of talented young people. My first thought was, “that’s a maintenance accident!” Thus I thought because the inferno was emanating from the roof and attic. And, I’ve seen this exact scenario before in Athens, Georgia, of all places.
On a summer day in 1995, I traversed North Campus. Smoke I smelled and then saw. Brooks Hall, then home to the Terry College of Business (the same MB goes on about) was burning. Bad. They had been conducting roof renovations and some jackleg ignited the attic whilst welding. We lost two floors that day.
So it most likely was in Paris. Notre Dame’s roof is a thin cladding of lead over centuries-old timber framing. Dry, dry, dry wood possibly treated with pitch or tar(?). The lead requires soldering from time to time but they have to be extra careful given what lies beneath. On Monday something slipped. Bad. You know the deal - the central spire collapsed, the roof is gone, and complete destruction was narrowly averted by 500 doggedly determined firemen.
I am not yet ready to embrace any theory aside from this obvious scenario. Yes, I’ve seen some pictures. And, y’all know I have a keen sense of affairs and a vivid imagination. As is, I don’t (yet) buy the Islamic Jihad or false flag angles. I have, however, sensed a tremor in the force of Western Civilization.
Little Benny Shapiro earned every bit of ire ever directed his tiny, 5-foot 2-inch, idiotic, yarmulke-wearing, Trotskyite, anti-Western, anti-Christian, snake-tongued-lying way with a single fool’s Tweet (in response to an impassioned plea from President Trump): 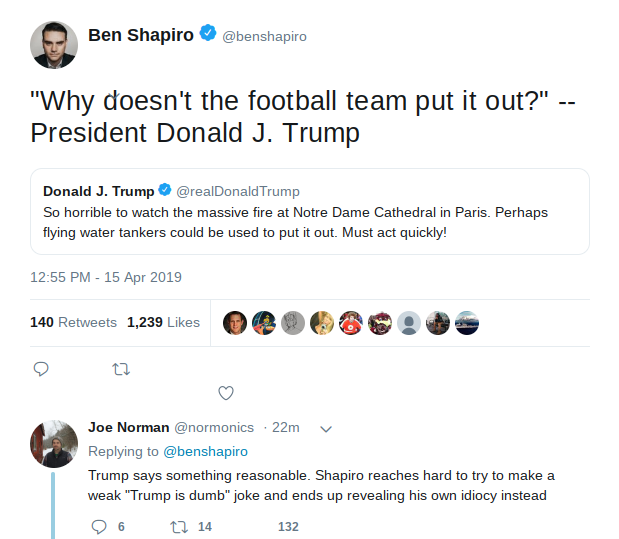 He perhaps revealed a little more than his idiocy. Dipshit Benny/Twitter.
Others of Benny’s kind instantaneously heaped the fuel of anti-Messianic hatred on the fire of French pain. Literally, to hell with them. And, too, with those of the Mohammedan variety who celebrated in the streets and smiley-faced and hearted on the socials. To hell with, again, with the degenerates of homogeneous globalism, of Macron and his vow to rebuild “in a way consistent with our modern diverse nation.” This isn’t their hour, any of them. This is our time ... of the Phoenix.
Joyful news broke that the damage was contained. Numerous invaluable relics were rescued, either by good fortune or by first responders. Fire brigade chaplain Fr. Jean-Marc Fournier personally saved the Crown of Thorns thought to have been worn by Christ. 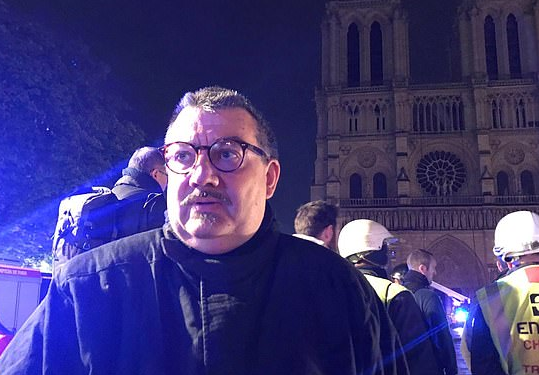 Fr. Fournier ‘showing no fear.’ Loraillere/Daily Mail (UK).
*Une note spéciale,
La Cathédrale sera reconstruite. La Nation sera reconstruite. Que Dieu protège les gilets jaunes. Puisse Dieu sortir les hordes. Dieu sauve la Chrétienté et la France!
Notre Dame will be rebuilt in a manner of glory consistent with French values. With Catholic values. With Western values. With those and those alone. So too, shall France and the West rise again. If the destruction of the church building of wood and stone was a metaphor for the late fall of Christendom, then we’ve already seen a Divine sign of promise and redemption: 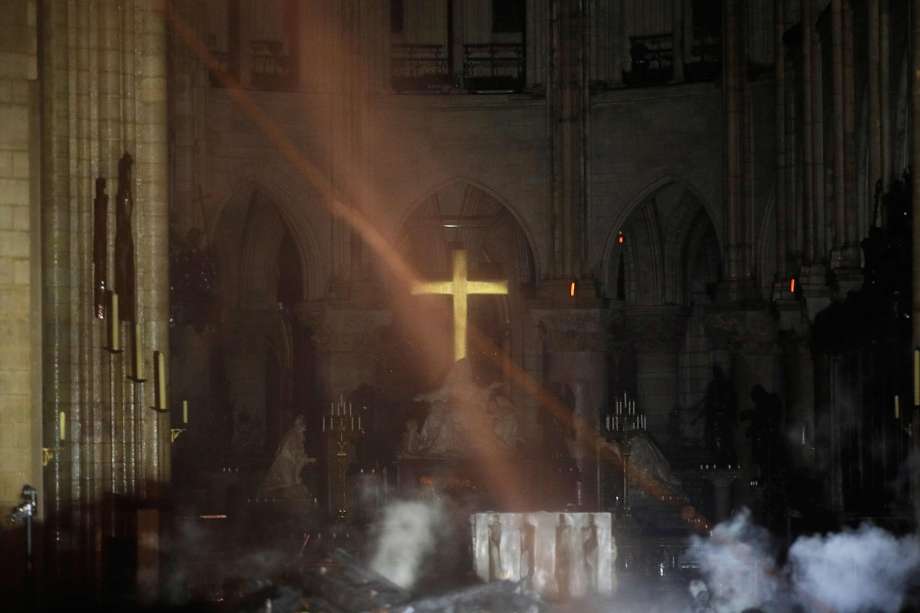 Hope amidst the wreckage. The altar candles didn’t even melt! Picture from Chateau Heartiste.
This photograph demonstrates the age-old fact that We cannot be beaten, because He cannot be beaten. We are told: “And I tell you, you are Peter, and on this rock I will build My Church, and the gates of hell shall not prevail against It.” (Matthew 16:17). Period. Joke on that, Shapiro Wormtongue.
Sports Desk (I have several desks): Glory in Augusta! Tiger Woods Wins Fifth Green Jacket Via Incredible Cinderella Comeback for the Ages.
Sunday, I drove from Covington to the Augusta area (to the “CSRA” of Augusta-speak). And, what a drive it was - deftly navigating a slew of tornadic turbulence. There were multiple wrecks, dozens of downed trees, inches of standing water, and blinding rain. Yet, I persevered. But, not like the man on the radio - a man camly determined to beat all odds and to secure a greater place in sports history. More on him in a second.
The 2019 Masters Tournament ended Sunday, the 14th, after a record NINE days! of play and practice. The previous Saturday, lovely Jennifer Kupcho won the inaugural Women’s Amateur Championship. Martha Burke, peace, be still. The fun continued the following day with the Sixth iteration of the National Drive, Chip, and Putt Finals. Congratulations to young Miss Angela Zhang and all other impressive winners!
Then, came something we haven’t seen in fourteen years - the Tiger show at the National. Putting aside the pain, the past, the former 1,500th ranking, and most importantly, his own emotions, Woods drove quietly though mightily for four days. On Sunday, as I sat at a rest area on I-20, he captured his fifth Masters victory, 13 under par.
This feat, comparable to Jack’s 1986 “old man’s miracle”, was beyond impressive. Love him or hate him, Woods once again proved he’s the best thing in golf. Tiger Woods had mastered and defeated his greatest opponent, Tiger Woods. Not too bad for a guy my age.
*Que Dieu guide et protège les golfeurs.
And, why was I on I-20? Well...
On The Road: Perrin Visits Covington, Mayhem Ensues…
For a year now, I’ve crafted these tales of the affairs that grip, shake, frighten, and soothe a Nation. I thought it was high time for a visit with headquarters.
I caught old MB hard at work teaching the next generation of real estate professionals. And, the wisdom flowed. Pic by Perrin.
Good luck to all the prospective pros! And, thank you “Amy” for humoring yours truly. Call me…
A whirlwind of smoke and booze lead us through Cork, City Pharmacy, and a high school prom. At last, we arrived at Casa Da. 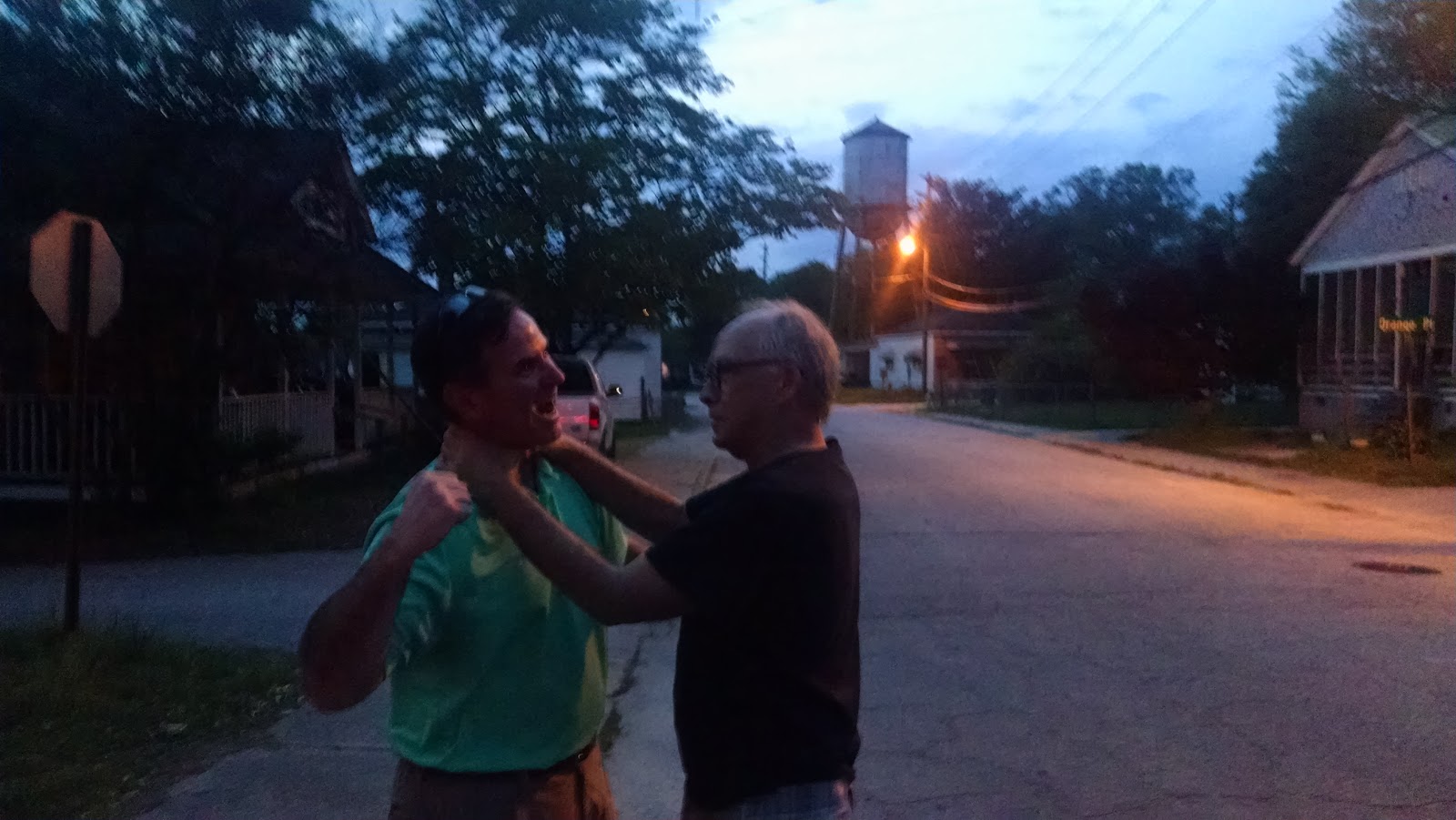 Left meets Right … in the street. Perrin.
We had a swell time. I finally got to smoke a cigar with Ellis. I’m already looking forward to the next time. Thank you for the excellent hospitality, Sir. This grouping was as dangerous as it looks. PL.
Next, we were off to Amici and a meeting with the one and only Miss Kayla! I thought I had found “The Korner” but they informed me I was merely intoxicated. Yes, she’s just as sweet and pretty as you all imagine. 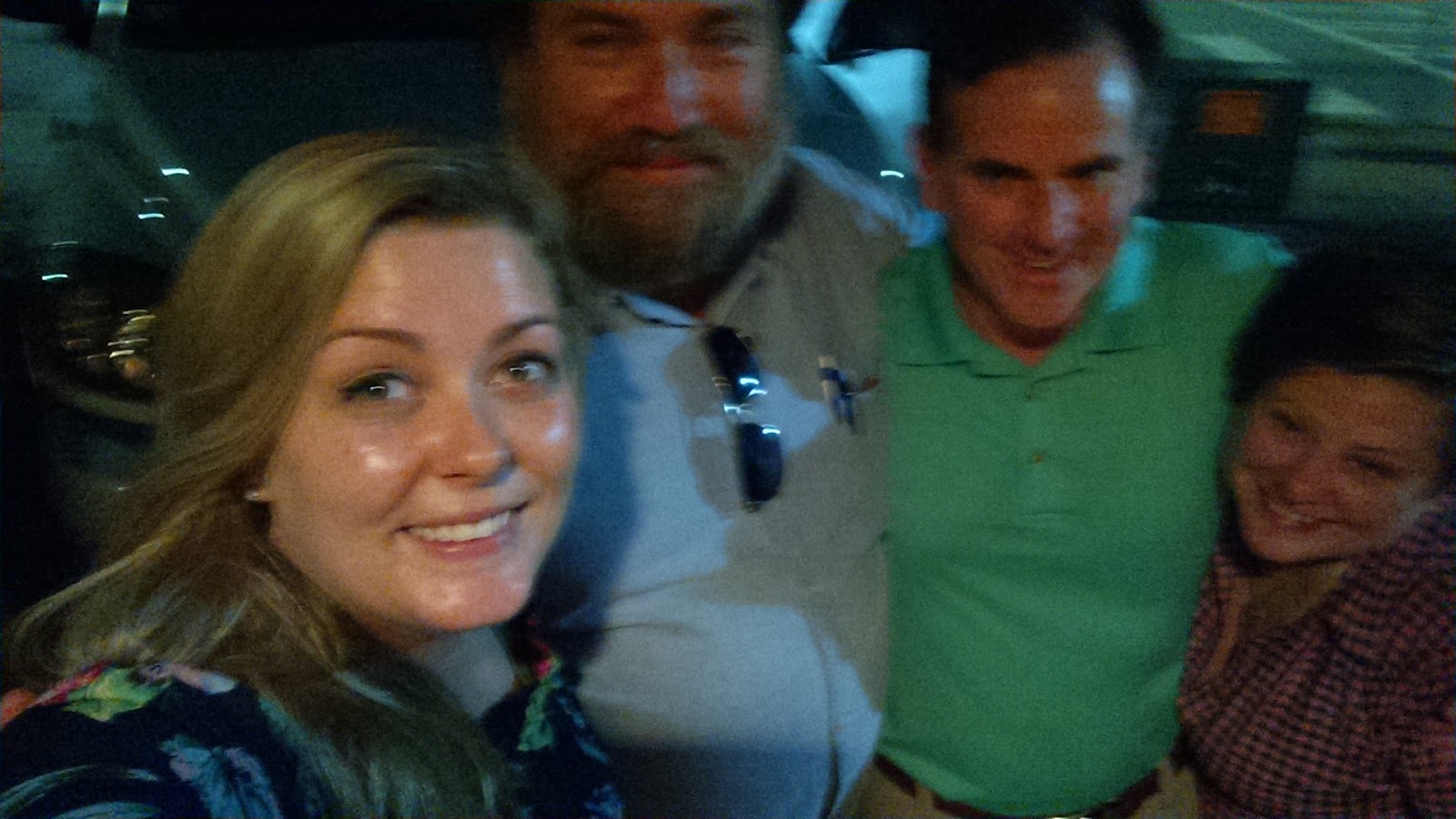 Bookends of beauty, books of … us... L-R: Kayla, MB, CFF’s Man o' the Road, Kayla’s darling friend. Another Pic by Master P.
The rest of the evening was a little fuzzy. We had pulled pork. I tried to broker a record deal at The Depot. Someone really should have given us water instead. A meeting with Jim Beam, a short walk, and a harrowing run from the police and we were back at TPC high command.
In the end, I think we agreed it was time to pay the C.F. Floyd a visit. We agreed on something. I admit that I greatly missed not meeting Bess and Melissa (next time, ladies!). I did, however, meet Marshall’s secret weapon and, undoubtedly, the driving force behind TPC’s enduring success: 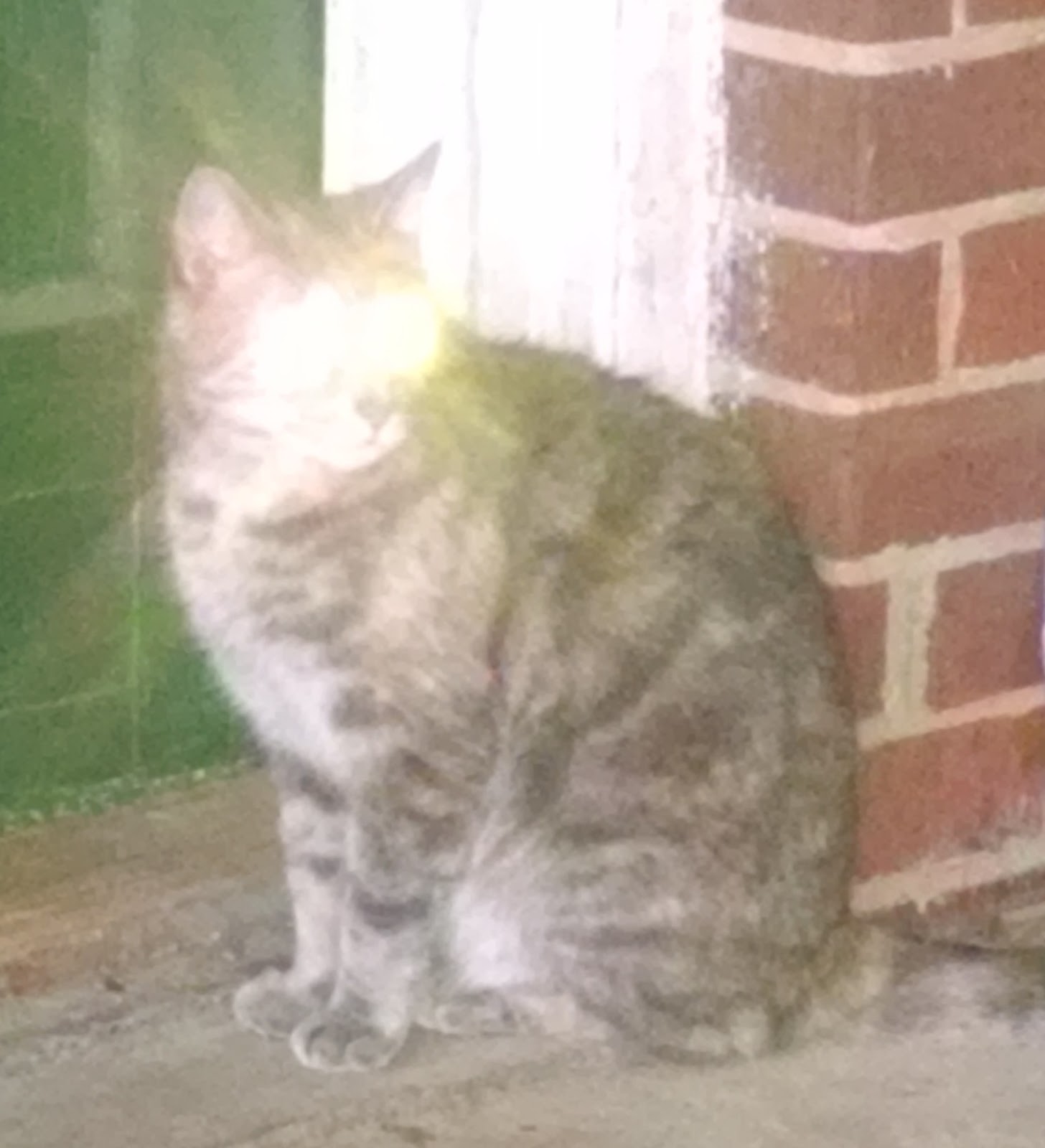 Vixen, the world’s most lethal cat. Yet ANOTHER Pic by Me.
*Ed. Note: It's true. Vixen is the Publisher/GM/CEO of TPC


*Dieu aide Covington...
And so it was: a mad man in a mad town. Now, you know the real story, if any.
*No cats, Realtors®, prom queens, golfers, writers, microscopic neocon-artists, or disc jockeys were harmed in the production of this tripe. Readers? Sorry, couldn’t be helped.