Chores were always a part of growing up in our household. It wasn’t about free child labor; they were learning lessons that when they did fly the coop they were capable of taking care of their own nest.

Even a 2 year old can set the table. Granted, each piece had to be handed to them one at a time and shown where it was to be placed, but they got the knack of it sooner or later.

Chores tended to run in 1 to 2 year cycles. Ages and maturity levels pretty much guided the “promotions,” if you’d like to call it that, I’m sure my kids had plenty of other names for them, but they all pulled their stint. Dishes, cleaning, cooking, vacuuming… Yes, it was quicker to do it myself but I figured they had to learn some way. It’s amazing how much better their aim got when –they- were stuck with bathroom duty. Oh, and it’s easier to rinse toothpaste down the drain than to scrub the dried mess out of the sink.

One favorite, of mine anyway, was when they were big enough to bring in the groceries. I figured if I could shop for ‘em and load them in the truck and cook the meals they could at least tote them in for me. That’s one of the times they “out figured” me. They figured out that they could load the grocery bags on a broom handle, put a kid on each end, and tote them all in within 1 to 2 loads. Note: Metal broom handles do not tolerate this well. Go for the wood ones.

Think 1 was the first to get his driver’s license and he was a pretty good driver. The augments began after he started trying to borrow my car. That left me stuck with virtually no way to find him (the kid lost cell phones on a regular basis). We finally came up with a deal. I wanted to go to Five O’clock with the girls from work every other Friday (aka – payday) and have a little unwind time. If he showed up at work, picked me up, took me to Five O’clock – and then picked me up by 10 p.m. – he earned borrowing power.

They all grew up, moved on, doing well and have households of their own. I’m looking forward to watching them teach their own children some lessons, just like I hope they each have at least one child JUST LIKE THEM!

PS: I’ve –got- to take a little jab at my sister. We never had a dishwasher growing up – we were IT. One of us washed, the other dried. When she finally left the next the first time (out of several) it was to get an apartment with her best friend. They loaded the dishwasher, turned it on and went out the sliding glass doors from the kitchen to go to the pool. Neither one of them realized there was –special- soap for the dishwasher. They returned to about 5’ of bubbles in their kitchen. Sure glad they remembered to close the door to the living room. 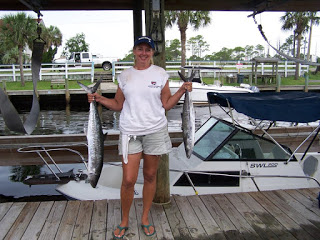