Here's my latest column from the upcoming Father's Day/Sunflower Festival issue of About Covington to Madison magazine. Hope you enjoy it - MM

Greetings. Hope everyone is well out there. First off, I’d like to take a moment to thank you for all of the kind words after my last column. It’s great to be back, and I’m so glad that so many of you are excited about it.

In the last column, I talked a good bit about courthouses. Well, I thought I’d expand on that a bit with this column. I received an email from a fellow by the name of Brant out of Oxford, GA. Brant, like myself, seems to be an enthusiast of Georgia courthouses, and he made a very good point: perhaps one of the best looking courthouses in our state, especially in terms of the view as you approach it, would have to be down in Sparta, GA (Hancock Co.). That is a great courthouse. As I responded back to him, Hancock’s would
probably be in my top 10 (maybe even top 5). Built between 1881-1883, it incorporates a Second Empire architectural design (the same as Covington) and is absolutely beautiful. Hancock Co. is an old county. It’s been around since 1793 which makes it a good bit older than Newton or Morgan, although not quite as old as the original 8 Georgia counties that were created in 1777. Hancock Co. and the city of Sparta, isn’t that far from us, just on the other side of Putnam Co. And as Brant said, Sparta might be Covington in another universe (as Covington portrayed the city of Sparta, MS in the famous show, “In the Heat of the Night”).

As a Courthouse enthusiast, I have found a wonderful online resource for those of you who share an affinity for this subject. Go to: http://georgiainfo.galileo.usg.edu/courthouses/contents.htm. From this site, you can visit links to all 159 Georgia courthouses complete with pictures, design style, and background information. This resource is called GeorgiaInfo and is offered by GALILEO and the University of Georgia Library system as part of the Digital Library of Georgia. In addition to the courthouses, there is a plethora of other historical information available on the main page: http://georgiainfo.galileo.usg.edu/ Check it out sometime – you’ll be glad you did.

Some of my favorite courthouses in Georgia other than Newton, Morgan, and Hancock are found in the following counties: Colquitt, Jasper, Talbot, Washington, Oglethorpe, Upson, Lincoln, and Meriwether. A bit of trivia: the oldest courthouse still in use in Georgia? That would be Columbia Co., in the city of Appling,
built in 1856. And the oldest one still standing that’s not in use? That would be Fayette Co., in Fayetteville, and was actually built way back in 1825!

Georgia is very fortunate to have so many courthouses. Our fine state has 159 counties and therefore can lay claim to 159 courthouses as well. Only the state of Texas has more counties than Georgia does and obviously Texas is a much larger state. Why does Georgia have so many counties? That’s a good question. The explanation for that is as Georgia grew over the years, it was decided that the county seat of every county would be within a one day round trip for anyone on a horse or in a wagon. So, naturally, that lead to a rather large quantity of counties as the state expanded. And as counties are the primary political subdivision in our great state, that meant anyone needing to conduct county business with the Ordinary (now called Probate Judge), Sheriff, Clerk of Court, or anything else would be able to do so without having to leave the farm for more than one day. Of course, these days we have cars, so perhaps having so many counties would be considered a bit outdated, but I sure wouldn’t want to change it. I think it’s pretty neat that we have so many counties. Have you ever tried to name as many Georgia counties as you could from memory? Try it sometime – it’s pretty tough. As a quick aside, a buddy of mine and I are planning on publishing a book about Georgia’s courthouses. Maybe one day that will come to pass. I sure hope so. 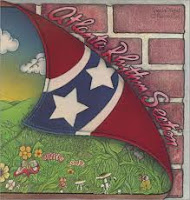 Well…I guess that will about do it. I’ve got some exciting things coming down the pike. I’m hoping to revisit the Rutledge area and do a story on the Ebenezer community and some of the old plantations and home places there. Also, I’m hoping to finally do an interview and a corresponding column on someone I’ve
wanted to write about for quite some time. I won’t reveal the name right now, but I’ll give you a couple of hints: the letters A, R, and S and the city of Doraville. Any guesses? If so, send me an email. Thanks for reading, guys. Until next time…