A fable to make Aesop cringe:


Many years later, after a successful stint as a lobster salesman to the LGBTQIAXWTFBBQ+V, P&C community, the wolf decided to come after your guns. Ever treasonous, the GOP was happy to help him. The end. 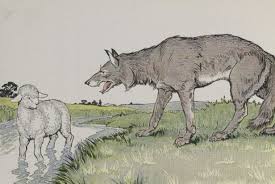 Mark Foley was not just on your phone screen seven seconds ago so you probably don’t know who he is. Okay, if you’re an underage male Congressional Page, then he might be on your phone. Otherwise, read Anthony Man’s pretty good article from Saturday’s Sun-Sentinel for details.


In fairness, I met Foley at a Florida political function back around 2001-02. It was, I think, a luncheon hosted by the GOP or the Federalist Society, maybe both. The late Rep. Clay Shaw was there too. Other than the usual politi-creepiness - which would eventually drive me out of the Fed-Soc and all political gatherings - I detected nothing out of the ordinary about Foley (or Clay). If memory serves, they both bordered on being kind of nice, normal. I would not have then suspected Foley was a gun grabber. According to the Sentinel piece, he is.


Today, Foley says, "If we can ban texting [while driving] we should be able to ban assault rifles.” Someone, at one of these online news places, in the not-so-distant past, kind of warned about the slippery slope of driving bans. Anyway, Foley also supports “red flag” laws and more background checks. He thinks this all supports the second amendment. Lindsey Graham, Peter King, and possibly even The Trump would agree.


And so it is that I have the feeling that more gun control is coming. But, not to worry, freedom lovers - there are always workarounds. For instance, Faceberg banned pretty much all commercial mention of firearms. Murf’s Guns of Oklahoma found a hilarious way around that. Watch: https://www.youtube.com/watch?v=z3TIxWZd6Zc


As a follow-up to this article, I may soon offer advice on two related topics - workarounds of other sorts. The first will be on caching firearms for the mid to long-term - storing them where the stormtroopers cannot readily find them. I think the time for that is approaching. Rapidly. Then, amping it up to the next level, we may look at some of the (very easy) ways to obtain arms directly from the enemy. Much easier than one would suppose. Both of these future subjects will likely be presented in a fictional format.