Greetings, fearless readers, & I sure hope all is lovely out there.

Well, as you may have noticed, your ole pal MB has been pretty quiet here lately. Other than my piece on Phil Johnson & that super quick bit about the Newton Co. Tax Commish, there has been no REAL Politick on the page in almost a month. For that, I apologize, but I really do have a good excuse this time! No laziness, no bottoming out/"having the bad gunky" or too much drink! No, I've been in music mode.

For the first time in 6 years, my old Rock & Roll group - Cool Swap AKA Neon Madmen - is playing a show! Super stoked, friends, and for the last few months my compatriots |John Thigpen, TJ Alexander & Scott Bowen| & I have been busting butt gettin' ready for this thing & Folks! We are ready to ROCK! 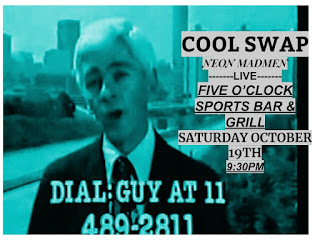 Well...what can you say? A whole bunch of malarkey, shenanigans, hijinks & skylarking. So, you know, the usual. According to my sources, JDS (Johnston Derangement Syndrome) now apparently has some folks pulling for toxic air & cancer. Also, reports of a certain State Constitutional Officer's right hand man trying to play politics with our beloved home city. Hey, I'm a facts guy. Data. As we'll soon be seeing, there IS a problem with our air, the full page Ad in the Covington News (that nobody will say who paid for) notwithstanding.

*Notice how this one keeps tightening. Word is that maybe Plitt, who would be a great addition to the Council, is not putting in the time, work & energy needed to dispatch Fleeta. Say what you will about the ole gal (and many have & do, Yours Truly included) but she's running a hard campaign. Steve better tighten up...

What originally started as simply relaying a story about a government overreach & land grab in South GA has now morphed into a thematic piece/profile story. The one & only Jessica Szilagyi. Look for it soon; you won't want to miss it.


Okay for now, scamps. Hope to see some of you tonight.