Perrin Lovett: Five Things UGA Could Do To Ensure Future Football Supremacy - And other entertainment news...

From the Sports and Entertainment Desk:
Yeah. So, About Saturday...
Like David Carradine, the Dawgs love a good choke. It just usually comes along a little later and to a better team. Due to certain circumstances, the annual meeting of the Georgia Faithful Next Year Club has been moved up to the Thursday after next - I believe - check on that. Anyway, I have been asked to deliver the keynote speech. Herein, please review my list of talking points - humble suggestions which, if implemented, might actually make one of these years “next year.” To keep this moving along, I only elaborate on number four.
Note: All five of the following points are related. I list them in order, from “difficult” to “damned-near impossible.” The final two are almost outside the scope of reality. Still, just making two or three easier changes would do wonders. Also, note that these suggestions are aimed at winning - National Championship wins. Due to the nature of the problem addressed in number five, I expect that many of you will have trouble understanding. Listen carefully, without interrupting, to whoever is reading this to you.
One. IQs Up, Weights Down (Difficult). More Wonderlic, less knee brace. Speed and smarts will help your new,
Two. Field General QB (slightly more difficult). To complete medium-range shots, while READING THE FIELD, even under pressure. He’s out there. Ask the,
Three. Win-At-All-Costs Crazy Coach (plain hard). He might be lurking in D1, D2, or the NFL - the contrarian OC who is audible on TV screaming about “going for it, already!” Working with,
Four. Your own “Ernie Adams” (possibly impossible).
Now, we get improbable. There may, in all the world, only be the one Ernie Adams. If not, then try to find his doppelganger. (You ain’t getting the original for any money). Ernie spends all his time plotting and plugging statistics into an algebraic formula… Huh? Who is Ernie Adams? Adams is officially the New England Patriots’ Director of Football Research. Yeah… Nobody else has one. But, he’s the behind the scenes logistical and strategic genius responsible for the Pats’ unparalleled two-decade dynasty. He’s the brains of the Kraft-Adams-Belichick-Brady axis. The one-man football Manhattan Project.
He’s five to ten years ahead of the curve, with the entire sport literally running through his algorithms. He studies all players, games, and stats in the NFL, most colleges, and many high schools (and, many even lower). His is the master plan wherein everything is reduced to mathematical simplicity.
How do you find one of your own? No idea, really. Do NOT look at other teams. Think about calculus professors, physicists, and /non-special/ financiers of the ELITE Wall Street variety (like Ernie). This one is tough. Almost as tough as...
Five. Ending the Loser Culture! (“damned-near impossible” / probably impossible). UGA officially disclaims two-thirds of their football national championships! Any other school would proudly claim all six, leaving the “disputed” to the losers. Bama would claim seven. Loudly.
At the meeting, I’ll have some further suggestions about getting vicious in demanding excellence and refusing anything else. For those who write this off as certain impossibility or just unnecessary, I give you a few alternatives:
1 - Drop to FCS. You’ll win out every year until the talent dries up.
2 - Be happy with who you are. There is nothing wrong with second place. Drop all this “our year” bluster and love that 9 and 3 or whatever. A !GOOD! team is, in fact, a good team.
3 - Invent your own Championship. Any .500+ record with a win over Tech = National Champs! Design your own trophy. Hold a parade.


Joker is White Noise: a Movie NON-Review
Confession time! I like Batman movies. Or, I did. Bats was always my favorite superhero. Well, it was a toss-up between the Caped Crusader and Wolverine - both loner sigma vigilante types. Had Bruce Wayne been a cigar smoker, it would have been the Dark Knight, hands down. But, that was then, and this is … okay, where is this going??
Joker is out now and cleaning up the box office. I sincerely hope that everyone who sees it loves it. I won’t be part of the audience as I no longer watch movies. However, from the little I’ve heard or read, it sounds like a good film as far as films go. Jim Goad and Steve Sailer posted two of the more intelligent reviews - both at Taki’s Mag, which one should read at least weekly. The rest, and maybe those two as well, can’t stop going on with comparisons to Taxi Driver, another movie I never cared for.
Riveting. Iconic. Scary. Over-the-top. Etc. Etc. It would appear that Joaquin Phoenix has joined Jack Nicholson, Heath Ledger, and Cesar Romero as definitive Jokers, each portraying the villain in a different, yet brilliant manner. Joker follows an origin storyline with which I am unfamiliar. It’s a comic book movie, without the comics, about a comic. Authur Someone is a failed comedian who goes nuts. (I think). Bruce Wayne is five. Daddy Wayne is Donald Trump. No special effects. Clown masks. Violence. Again: good, so far as it goes.
But, where does it go? Where can such a fictional spectacle run to in a place and time such as our own? We’re literally overrun with a population of jokers, many of them psychotic, committing mayhem to the point that the words “jokers,” “psychotic,” and “mayhem” have lost meaning. Really, what’s one more violent, mentally-ill clown adding? The answer to that last question might be nostalgia.
Joker is set in 1981 Gotham. This may simply have to do with continuity or something, but I suspect that the producers are trying to lure in Gen Xers like me with vague remembrances of our childhoods or early teen years. It was long ago, and it was far away, and it was so much better than it is today.
Rumor has it that they’re up to the same trick with the upcoming Star Wars flick. Evidently, to make sense of the otherwise senseless and attempting to salvage something from the last two installments, they have resurrected the Emperor. That makes perfect sense because Rise of Skywalker is a remake of Return of the Jedi. Gotta have Palpatine for that. Seriously, a remake.
Star Wars Seven (name??) was a remake of the original - kid from a desert planet blows up the Death Star, gains powers. Eight (Jedi??)  was The Empire Strikes Back, but in reverse - space chase ending on an ice world. Skywalker will find our heroes back on the sand planet, with a toothy, ground-dwelling monster trying to eat people, followed by an “ultimate” confrontation with Darth Sideous. Again. No word on the Ewoks. My greatest fear is that Jar-Jar shows up.
There was another recent film that I thought I would enjoy. I might have, had I ventured into a theater. I didn’t. Now, I can’t even recall what the movie was called or about. I’ll live - and happily. The last one I can remember seeing was Dunkirk, a superb work of historical art that made me angry about the state of Europe from about 1910 to the present.
Anyway, this has been our annual edition of At the Movies, without Siskel and Ebert. Next time, we’ll get into those hip new TeeVee shows. [Do NOT hold your breath!] 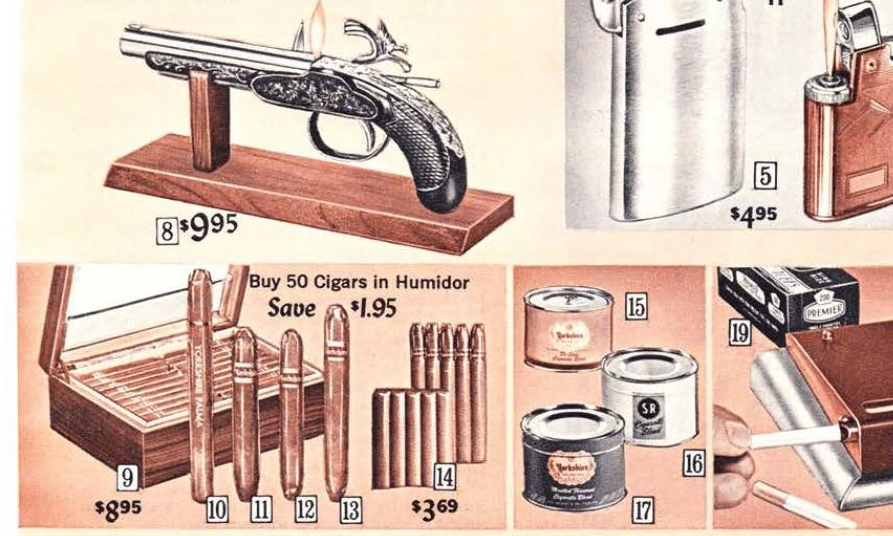 50 cigars! for $8.95… Sears Christmas Catalog, 1968, another year from which UGA could (but does not) claim a championship...
And, A Glimpse of the Old America
For a trip down memory lane, I present wishbookweb.com. Sears, JCP, and other Christmas catalogs from 1937 through 1996. Watch the prices rise as the style declines. Yes, they used to sell pipes, cigars, and guns. A more elegant retailing from a more civilized age…