The economy is roaring along. Record low unemployment. Banks have never been stronger. DOW is way up there somewhere. Everything is fine. Go back to sleep. Kindly ignore the constant hum from the printing presses down in the Financial District.
Consider this a sequel to my September 24th column on the same subject. That was like a long time ago. You’ve probably forgotten. Waaay back then, starting on September 16th, the New York Fed announced they were injecting just a tiny bit of extra cash into the [VERY HEALTHY AND IN NO WAY ABOUT TO COLLAPSE] commercial banks. “Tiny bit” could have been estimated at around $2 Trillion. Could have. Who, honestly, knows? The program was supposed to last until October Tenth. But why cut short such a good thing?
Now, it’s going to run through and until November Fourth. Fifty days of free fiat funny money. Fifty days. At one-hundred and five billion dollars per day. That’s … let’s see, Gawd… Okay, 105 x 50 = … Hang on… I get … gonna run this straight out, numerically: $5,250,000,000,000. That’s just a shit ton of… Oh! Hang on, again. They’ve attempted to obfuscate with the REPO BUCKS!!! (like a lottery game, but where the ticket is forced upon you and you have to pay out the jackpot…). Something about, in addition to a flat daily grafting of $75 Bn, another $35 Bn, but only twice a week, unless the moon is full. Originally, it was $30 Bn… It’s still…
Well, hell! The “zero” button on my calculator broke.
How on Earth do we explain this??? I thought a little ditty appropriate: 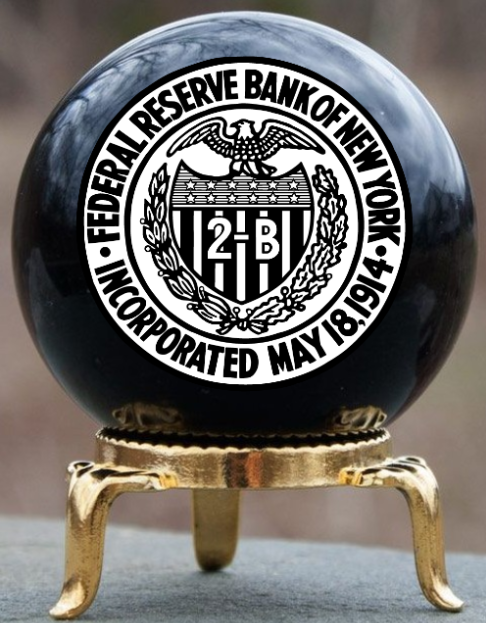 “Crystal ball on the table,
Showin’ the banksters the graft.
Same scheme with them evil lies.
And, I knew it was a ton of cash.
[Da-Da-Da-Da-Da…]
It’s just an asset REPO,
with money on their mind.
BEWARE THE ASSET REPO!
They’re gonna GET YOU!!!”
[SINCEREST APOLOGIES TO CLIFF RICHARD] [Really, so sorry, man…]
Waaay back when, I promised: “Excuses aplenty will be quietly provided.” And, right on cue, excuses were made. The banks had those pesky quarterly tax payments. Washington unloaded some worthless debt onto unsuspecting marks. Kanye got all churchy. Like I wrote previously, “The dog ate my liquidity, Mrs. Wall Street!”
We’re told: "The operation schedule and parameters are subject to change if market conditions warrant or should the FOMC alter its guidance to the desk.” Translation: We have no idea what we’re doing. This charade will continue or expand as needed ad infinitum.
Not satisfied with that word salad nor anything provided by the (lapdog) financial press, and not finding any explanation of the NYF website, I flew up to Noo Yawk last Friday for an in-person assessment. When I asked Gov. John Williams and the visiting Jerome Powell what the hell was going on, they had this to say:

Williams and Powell, from their popular TeeVee “comedy” skit.
I’m not the only one noticing that something is amiss in The Bagel. Bernie Sanders was so shocked that he had a mild heart attack. Donald Trump tweeted something bordering on illiterate. Elizabeth Warren cracked a beer in her kitchen and burped. You’ve no doubt heard all the commotion from the CNN-FOX-CNBC-CBS-CIA-WAPO-WSJ-cabal news. Ordinary folks have noticed too. A few of them left surprisingly intelligent and angry commentary following the above-cited article. Hereafter, I try to address some of their concerns:
“What is the point of a reserve requirement if they cannot meet it? And what are these proceeds for? I heard to keep hedge funds and other risk-taking financial institutions solvent. Why is this sector always getting supported to keep their gravy train going at our expense? The market is telling you something, and trying to correct itself. Why does the Fed keep interfering?” - “Joseph”
Thanks, Joseph. It’s because the Fed consists of a nefarious bunch of liars and thieves.
“The banking sector is in a much larger crisis than anyone realizes.” - “G.H.”
You damn right, dawg!
“anyone else think the fed is lying to us again, just like hank paulsen 11 years ago? tell me again why this monopoly bank is allowed to invent hundreds of billions of dollars every night to prevent the collapse of our banking system, and congress seems to not know or care?” - “Loren”
Ha! Ha! Ha! Ha!!! Congress!!! Oh, Lord… Seriously, it’s because the Fed owns the government, lock, stock, and barrel. Make sure to vote next November!
“Free market?! Think again.” - “Zhaoyun”
Woah, chief! They don’t like us using the “F” word in this country, now. T-word either. FYI, they’ll sic the ADL and SPLC on you ASAP. LOL.
Does this move amount to QE Infinity? If so, think of the grand possibilities! If the Creature prints fake money to cover corporate taxes, then why not print more to cover all taxes? If my pre-abacus demise figure of $5 Trillion is anywhere close to accurate, then that’s more than the FedGov spends in a sordid fiscal year. We could pay for everything and more! Without ever worrying about the IRS. Medicare for all? Done! Green New Deal? Paid for! Deal of New Green? Sure! Pot for every chicken? Libertarian delight!
But hey… Just don’t let “Zhaoyun” come along with another of the forbidden words, the H-word. As in, hyper-inflation. That just can’t happen here. Germany, Zimbabwe, Argentina, and Venezuela are foreign parts, not at all like us. We’re exceptional. As proof of such, I posit that our sorcerers use the biggest, bestest crystal ball for a game called Repo Bucks. That ain’t ordinary. That ‘Murican. Everything is fine.