If the old canard is true, that the sultry Jewess is deployed to beguile the Goyim, then Gal Gadot is Judaism’s ultimate weapon. I don't think the ancient rumor is necessarily correct, but if it is, then in this case I’m okay with it. Heck, I like it. The ranting, raving, sub-literate mental cases of the social media world do not. Wonder Woman triggered the depraved, the wicked, and the stupid. With this: 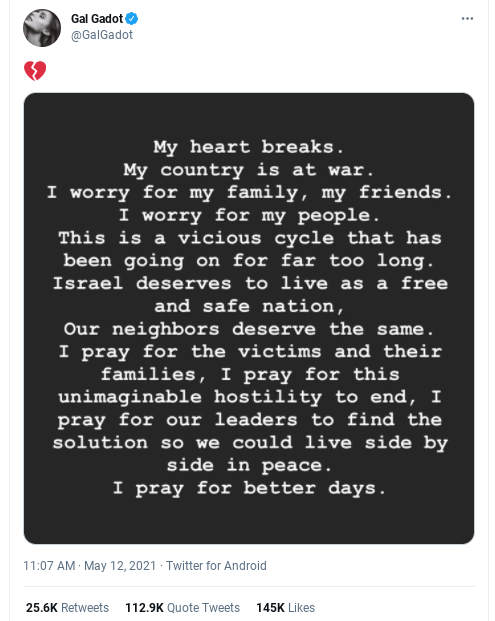 Pray for peace, incur the wrath. You likely know what the socials and the gekaufte journalisten say. Gadot’s simple, heartfelt, easy-to-read, and easy-to-understand message of peace was met by a fusillade of vitriol from the darkest depths of the underworld. For the sake of positive redirect, I’ve decided to reframe the attacks in terms of reasons why every sane, decent person should love Gal Gadot. First, I’d like to get a few things out of the way.

They say they want to “cancel” Mrs. Gadot and have everyone “unfollow” her. They failed. She’s Gal Gadot. She’s not getting canceled. She’s only gained followers since last week. Regardless of extremely poor media coverage, there is no backlash from her fans. They love her. Period.

The fools mocked about “ratio-ing” her after she blocked moronic comments on her sweet note. (The devil’s tools then shifted their focus to older, unrelated posts). Ratio-ing means they wanted to drive the number of Retweets (against her) above the simple “Likes” in her favor. A ratio, and I don’t expect the average hater to understand this, is a mathematical concept. Using the numbers in the above capture, from May 16, 2021, we see that the total aggregate of Retweets and Tweet Quotes is 138,500. Assuming that all of them are negative - and they’re not - then they are still outnumbered by the 145,000 Likes. Her message has over one million Likes on Instagram. People love her. People stand with her.

The relative few who don’t like her, sad cases, for the most part, call her a variety of names like Zionist, Nazi, murderer, baby-killer, Hasbara agent, oppressor, and, yes, racist. She’s a high-value celebrity, so she catches it from all sides. Israeli/Jewish loons and hardcore pan-Zionists say she betrayed her nation and people by staying neutral or by curing favor with the Gentiles and Arabs. Mean people say a lot of things. Too Jewish or not Jewish enough.

A few detractors may sincerely have valid points. Leaving a legitimate plea about the war on one of Gadot’s National Geographic IMPACT episodes might be misplaced, but it is somewhat understandable. I suspect she is sympathetic to all licit parties.

There is the legion of jackasses who just want to abuse her, her family, and anyone/thing she might care about. These sorts were leaving idiotic, derogatory remarks long before any of the recent events commenced. Some admit they hated her from day one. Last week just gave them an excuse to really crank up their pitiful garbage.

Many Gadot-bashers are, I deduce, robots and paid shills. There’s just too much homogeneity and synchronization across many of the comments on multiple platforms. That made me realize something; this isn’t really about Gaza and it’s certainly not about Gal Gadot. It has the signature of the Unrestricted Warfare described by PLA Cols. Liang and Xiangsui in 1999. There are multiple fifth-generation conflicts being waged around the world by multiple parties for multiple reasons. Some of them concern Israel, the Arab-Muslim Middle East, and the United States. Who and why? I have no definitive idea. However, a popular movie star provides an attractive vehicle for spreading the overwhelming chatter. Strange things do happen - more frequently than one imagines.

Has there been any effect on our beloved actress? In the long run, she’ll be just fine. As more than a few tabloids report, she’s gone Romeo Siera on the social front. She did an interview with National Geographic though it may have been recorded earlier. The world press has been as useless as ever. I briefly searched Israel outlets for information. All I found was a rehashing of generic wire nonsense at the Times and JPost. They are, as might be expected, preoccupied at the moment.

We’ve learned another great thing about Gal Gadot! She is not a Republican. She may be quiet but she’s not backing down or apologizing. Bots and shills aside, she’s dealing with SJWs. All they do is lie, double down on the lies, and use the lies to project what’s really wrong with them. It's their sad burden to bear. Let them. Gadot was in the IDF and she works in Hollywood. She has thick skin. Still, at some level, the unjustified acidity hurled at her has to burn. It's problematic trying to help soothe a terrible situation not of one’s making only to be stabbed in the back for the trouble. Something tells me she will gather whatever pain she feels and channel it into something else bigger, better, and more productive.

She’s a sweetie, they have an agenda. She's pretty, they're jealous. She's successful, they're ignorant. She's good, they are wicked. To celebrate her and to contrast her with them, here are my seven reasons Gal Gadot is the best export Israel ever sent to the unworthy world.

Proudly, openly, and from what I gather from fast yet reliable research, faithfully. In terms of non-ethnic affiliation, my guess would be Reform, but I'm not in the know. Were she a Christian, she’d strike me as a Methodist. The plain fact is that the SJWs and other evil-doers hate God and Gal Gadot is His good servant. אלוהים יברך אותך, אישה מתוקה.

Proudly, openly, and defiantly. Whether she considers herself one, she is a nationalist to one degree or another. Per her very plain words, she’s concerned for everyone - through the lens of her people first. Israel is her nation! This bold, kind defense is right, being in accordance with the actions, instructions, and predictions of the Almighty.

Based on my research, she’s a mother of two with one on the way. (Congratulations!) She’s been married to the same man for over a decade - in Hollywood. Loyal fans joke that he, Yaron Varsano, is the luckiest man alive. He might be though his fortune is only one-half of the happy equation. She’s also lucky if that’s the right word. She’s a wonderful mother, wife, daughter, relative, and friend. Some of the trolls have stooped so low as to wish her children harm, which really tells one everything about the trolls. Gadot obviously loves children and not just her own. I saw some videos of her posing with fans at conventions. While she was kind to everyone, from the way she treats the kids, one would think she was the one there to see them. One will also note from these interactions the mother in her: effortless, natural positioning of children for photos; hugging, picking up, and cooing over toddlers; and straightening clothes without looking.

This is a Zionist Nazi Oppressor?

She went to a children’s hospital in the full, theatrical Wonder Woman costume and visited with the kids and their families until, as it sounds, they got tired of her. CDAN, which has nothing negative to report about Gadot (that says something), praised her kindness towards the young even when they interrupted her at restaurants. Again, from the encounters, it’s more like she’s the children’s fan than the other way around.

This one goes without saying - yet it’s perfectly fitting. We speak of the good and the true. Sometimes beauty is literal. There’s a reason why the wicked hate beautiful things and people.

The sound matches the sight. Listen to anything she’s ever said.

Her most famous role is performing as a comic book character. Yet she does something beyond bringing a fanciful fictitious persona to life. There are, in the films I’ve seen, numerous scenes with necessary cliche dialogue. Wonder Gal still makes them work, makes them believable. One doesn’t see Gal Gadot acting, one sees the character. It’s enough to almost suspend my near-impenetrable disbelief.

I have no idea whether she had formal training, or if she’s a natural, or both. She has a gift. I watched a few of her home videos, social media shorts, and interviews and she just has a way of melding speech, movement, intensity, and keen intellect into something instantly convincing and marvelous. Whatever it is, it works. She does too. The hours and effort involved in her business are insane. Before the Twitter storm, she was criticized for being, surprise, surprise, a rich elitist living in a magic castle in the clouds. If so, then she earned it. Be inspired, not jealous. Be thankful.

Seven. She Uses Her Celebrity for the Greater Good.

She doesn’t have to and still, she does. With scores of millions of fans worldwide, she has the platform to make a difference. Her missive last week was an attempt along those lines in addition to her knowledgeable opinion about something very close to home. Using her very intimate remarks, she tried to help everyone. The dull scorn of an angry world notwithstanding, she did.

She does that frequently and intentionally. For anyone unsatisfied with her substantial philanthropic work, I ask, “What have you done?” We all know the answer.

Gadot knows people listen to her. They listen because she’s a wonderful woman and because there is a greater Power in and behind her. Ironically, all the baseless attacks of late only reinforce that truth. Proof of evil often leads to proof of goodness and, ultimately, of God. The wicked attack the good and the just because they are good and just. Gal Gadot was given her talents for a reason. Her use of them for our benefit is a miracle. Good, True, and Beautiful.