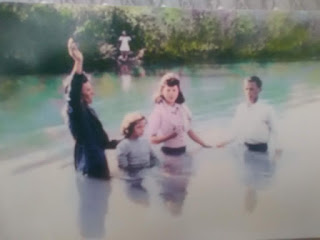 Neil and Clifford find themselves in the same chapter not only for economy of effort but because in my early elementary school years they were the neighborhood kids with whom I most often hung out, they being my closest neighbors. If they were alive today, which I tend to doubt, they would not like being in this chapter together. I don't remember them interacting, which surely they must have done at some time, but they would have each found the other despicable. Clifford could well have died of AIDS years ago and Neil have been the victim of a prison shiv incident.

Neil Camp was a white trash bully three years older than I who lived as I recall with his mother and five siblings. There were three much older brothers, old enough that they didn’t play baseball with us, whom I rarely saw. I only remember one of their names.Swear to god, it was Van. Then came Neil, eleven when I was eight, then Jan and Joey, one and two years younger than I. I never knew anything about their father, whether he had died, up and left or was imprisoned.

If you had sat on the front steps of the Holly Springs Baptist Church in 1960 and looked out toward Highway 5, 150 feet away, you would have seen to your right, across the parking lot, the newly built brick, three-bedroom pastorium in which I lived with my parents and my youngest sister Wylene. To your left, maybe two hundred feet away, you would have seen Neil's house, an early 20th century white frame structure, the front porch of which was about ten feet from the aforementioned Highway 5. Between you and the highway a city street angles off at Neil’s house then runs parallel to the highway past the church parking lot then between the front yard of my house and a lot containing a trailer in which Clifford lives.

Behind you is a small cemetery and the woods, a several acre pine thicket owned by a Mr. Barrett, a Methodist and the richest man in town, in which Neil and I hung out smoking cigarettes and occasionally checking rabbit boxes he had set out there to capture the creatures. To your left on the verge of the thicket and between you and Neil's house is a barn-like structure inside of which is a two-hole outhouse. I assume the Camps had  indoor plumbing by then-- I don't recall a well-- but the outhouse received a lot of use. Neil on one occasion taunted me with a threat to drop my puppy, which he held over one of the holes, into the writhing sea of maggot infested feces below.

Besides hanging out in the woods, Neil and I played a lot of baseball, a thing in which I have taken great interest from my ninth year until this day. In spite of losing his right middle finger in some sort of chicken processing machinery early in  our acquaintance,( He and a friend had been trespassing at a chicken plant less than a mile away. Today that would result in substantial damages paid by the chicken plant owners for their negligence in allowing small children to wander into the plant, but I don't think the Camps got any money.), Neil was a good  baseball player. Although he belittled my skills then-- I was a nine year old rookie Little Leaguer and at twelve he had made the traveling All Star team-- I later realized I was better.. At twelve I was on that All-Star team, had led the league in hitting and finished second in the home runs.(2). I could conceivably have finished first( 5) had I not missed the last three games of the 18 game season with the mumps.

We played baseball in Neil's yard between his house and the church with whatever kids happened by. At nine, a long blast for me was hitting one to the parking lot, but sometimes high school kid would drop in who could hit drives over the parking lot into my front yard. Fortunately we were all right handed pull hitters because seventy feet down the right field line the woods started. 125 feet to right center were church windows.

Neil and I would sometimes sit on his front porch watching the cars go by, playing a game I invented which I will now call Fantasy Auto Draft. Highway 5 was a busy two-lane throughfare. You took it south to go to Marietta and Atlanta, north to the county seat of Canton (where we played Little League), and if you wished to visit the Millsaps homestead in Fannin County, to Jasper, Ellijay and through Blue Ridge to the Cahuttas.

The game began with a coin toss, the winner taking the first choice which was always Chevrolet, the loser picked Ford, then came Plymouth then Dodge. Those numbers were fairly dependable, but the calls got pretty dicey when you got down to Chrysler, Mercury, Lincoln, the four other GM sedans, DeSoto and Nash Rambler. The last car chosen was inevitably simply “foreign’. You had your list of auto brands and hoped more of yours passed by than the other guy’s.

Amazingly to me today,-- best I can do now is black SUV--we could both identify every make of car that passed, not only the model but usually the year.

Neil rarely bullied me when we were alone --the puppy incident aside-- but when we were with older boys he would boast that he could make me cry just by looking at me. And indeed he could. He would demonstrate by fixing on me a steely, menacing stare, and try not to as I might I would start watering up like Pavlov's dog when the bell rings.


This ended one day on the concrete entrance in front of the church. I must have recently watched some swashbuckling-- Zorro was big on TV then-- anyway there were for some reason some lengths of corner molding nearby, probably left over from pastorium construction. I picked up one and challenged Neil to a sword fight. After a few thrusts and parries Neil surrendered with fear in his eyes, mindful ,I knew, of his maimed hand.