Do people still do that? Give naughty children coal in their Christmas stockings? I suppose, with all we’ve learned this year from Alexandria O’ Communist and Greta the Human Shield, that it’s best to give renewable, eco-friendly truancy deterrents. How about a puff of solar wind for the not-so-nice kids? We allegedly have quite a few of them.
Shortly before shooting up an Air Force training school in Pensacola, Florida last week, Saudi al-CIA-da terrorist Mohammed al-Shamrani Tweeted “I'm against evil, and America as a whole has turned into a nation of evil." He added, “I’m not against you for just being American, I don't hate you because your freedoms, I hate you because every day you supporting, funding and committing crimes not only against Muslims but also humanity.” He then murdered three people and wounded eight others. Six other Saudi “students” have been arrested in connection with the attack. There is, at this time, no word on any dancing Israelis nor structural irregularities at the new 2 World Trade Center.
First, what is it with Saudis and flight schools?! I mean, maybe it’s not a good idea to allow foreign terrorists into the country, let alone into gun-free crime zones. Just a crazy idea. Second, something is nagging at me that maybe Mohammed had a point.
There is a credible argument that the United States Empire is a global force for evil and is inhabited by the descendants of Sodom and Gomorrah. Forget the ongoing clown shows under the Capitol Dome and at 1600 - those, I fear, are mere circus sideshow distractions. Under the big tent we have, just to identify a very few:
And then, there are the very gifts we give our children. No, I’m not talking about the crushing debt, the budding civil war, or the soul-sucking depression of living in a dead anti-nation. Just ordinary toys and such.
Michael Snyder, at his so-aptly-named End of the American Dream site, just ran a list of some hot new toys and gifts for the tots. I’ve read and respected Michael’s work for years. He’s a little one-note-ish, but the truth is that the tune never ends. Anyway, he lists a few items that Amerikans are buying for their children this Christmas $eason. There’s a fart launcher. There’s Flushin’ Frenzy, where the tikes battle to keep a piece of plastic shit in the toilet. Shoot the Poop is a similar game, featuring another toilet that eats more plastic shit (fed by the kiddos - a coprophagic first). For the transitioning child or stoned LGB+VPC enthusiast, they have Magical Unicorn Rainbow Poop. (Yes, there’s a Number Two theme this year). Last and most disturbing, is A CHILDREN’S BOOK OF DEMONS by Aaron Leighton. One of the demons, the one on the cover, is Corydon, styled by Leighton as “one funny demon!” As Publisher’s Weekly puts it: “(a riddler named Corydon requires a sigil ‘drawn in bright red, the colour of a clown’s nose—preferably while you’re giggling’).” Does the name Corydon sound familiar? As Socrates and Virgil put it, he’s a child-molesting queer. Giggle!
Like Snyder, I won’t link to the book, but I did read about it. The Amazon description invites the young to “dial up some demons.” Hilarious! Giggles! Dialing is akin to summoning. Whether actual demons appear is up to them. Sometimes they do show up with less than funny antics. The good news is that 78% of the reviews are one-star and most call the book out for what it is: “pure evil” and “satanic.”
If you follow the culture or just this column, then you may have spotted the trends. All of this stuff is related and it is all deliberate. All part of the plan of those who have turned America towards evil - thanks for the call, Mohammed. From lumps of coal to lumps of (plastic) shit.
However, I’m not going to let them win. I at least won’t end this article in darkness. In fairness to the toy retailers of the land, the base lists from which Michael culled the crap (pun) did, in fact, feature many ordinary and appropriate gift ideas. In that traditional spirit I give to you page 564 of the 1975 Sears Christmas Catalog, courtesy of Wish Book Web: 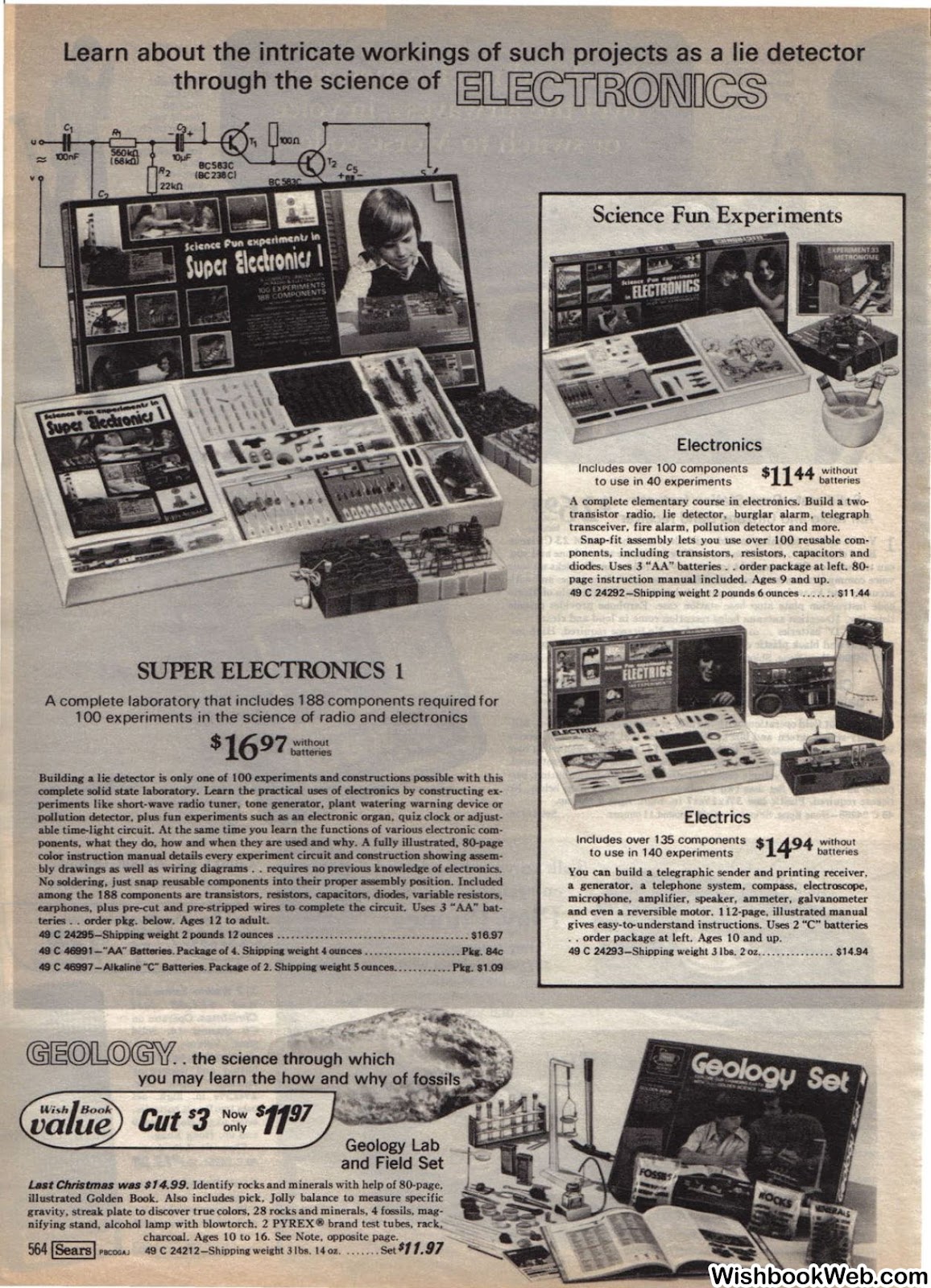 Of course, who could afford 140 mind-stimulating experiments for the outrageous price of $14.94?!
Ceding some Christmas cheer to the secular, there are still decent things out there to brighten a child’s life. Find them.
Also, remember that THE SUBSTITUTE makes a fine Christmas gift for the reader on your list. And, for early in the coming new year, we’re cruising steadily towards the continuation of the Tom Ironsides saga. AURELIUS is coming, with action, action, and then, some action.