Welcome back, Dear Readers! It's the end of the year so it's time to recount the most read stories in 2019 here at The Chronicles. You can read 15 through 11 here.


Even before the election had reached its conclusion, I'd made the decision that I was going to really delve into Horton's campaign contributions. The big thing was, I just wanted to see how much he paid for that billboard (so did many others, including those who supported & voted for Horton). And, naturally, how much he raised overall.

Well, it would end up being record breaking. 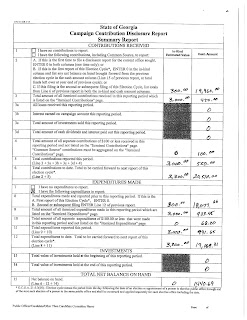 I'm fairly certain that's the most money - by far - ever spent on a Covington municipal race. Let's delve in.

As I - & several others - noticed, it looked like the Horton campaign & Aj Liquidators were kind of playing with fire on this thing. $2500 as an in-kind, just below the limit, but then they do another $440.34 as an "expense." I almost think they tried to get a little too cute with that one. Though, not surprisingly, there's a lot of vagueness & wiggle room in our campaign finance laws, so...

The big takeaway, in my opinion, is how several supporters of Horton's that I've spoken to are VERY concerned with the amount of money raised for this race & especially with the list of his high-level donors. I believe things have become pretty clear to several. Things are not always as they seem. Be careful what you wish for.

This is a story that, moving forward, will very much be DEVELOPING...

Friend of the program & fellow Freedom advocate Andy Allen wrote a very good piece in anticipation of the changes - compliments of the Trump administration (Bad Trump < Good Trump) - with vaping & e-cigs. And now, just a few days ago, we see Congress & the POTUS go full-on Nanny State Big GOV with raising the federal age to purchase tobacco to 21.

Thank you Main Stream Media, The CDC, The American Medical Association, for absolutely scaring the crap out of everyone, and being so irresponsible in not reporting what is actually making these people who are sick from “vaping related” illnesses. Please people...I beg you...do your own research on things that you don’t understand. People are getting sick because, people are vaping a vape cartomizer already pre-filled with a THC substance with a Vitamin E acetate oil base. The problem isn’t mainly the THC part....it’s the base.


Now....this IS NOT what the media, nor healthcare officials are reporting! It’s dishonest, and disappointing. I, along with many other people here in just The City of Covington, Georgia alone, have been vaping for years now with no pulmonary issues whatsoever. In fact, any pulmonary issues I had from smoking combustible cigarettes for 30 years, are now gone since I started to vape. Please...Look at this information and think for yourselves.

*ed.note: when I researched the page views at TPC when prepping this story, the following two write-ups literally had the same number of hits; later, I checked them again - they'd both slightly increased their views - and they were still tied...seemed like a sign that I needed to include both of them. --MBM


8)a. TPC Real Politick Check-in by MB: The Continuing Tone-Deafness of the Horton Campaign

Another one on Steve Horton:

Snatching defeat out of the jaws of victory has seemingly & apparently been the M.O. for basically the entire campaign season of Team Horton. If there was a single race in this municipal election cycle that should've seemed like a lock, the smart money was on this one; however, these recent events, along with some other key gaffes - previously having politicized the DB/Bard situation & then later trying to call out Johnston & McKelvey for not attending the meeting put on by the attorneys looking for potential clients (only to realize the error & then deleting  its original post) - has to make one wonder about the judgement of this campaign.

And, to that point, when I first heard that Ronnie Cowan, Newton Co. BOC 5 Rep & honorary Democrat on the Newton Co. Board of Commissioners, was actually incorporated into Horton's campaign literature, I simply couldn't believe it. "He's not that tone deaf," I said to a particular person, "send me photos," I said.

Well, I kind of missed the mark on that one, didn't I? But I really wonder if a sack of potatoes could've hit 50% plus 1 on this one, what with the electoral dynamics we witnessed in the home city & the horrid case of JDS (Johnston Derangement Syndrome) that afflicted so many.

8)b. City of Covington, GA Official Has Jumped the Shark

This satirical page that was met with much fanfare in the beginning - including from yours truly - later seemed to take a turn for the worse...

But here lately, it's all grown...a bit stale, tired.

Is a glorified troll - and a lazy one at that - all that this burst of the light fantastic has turned out to be? Well,  that's kind of sad; sort of a waste, no?

It's funny, though, right up until the very end, over half of Covington seemed to think I was the one behind it, but then once things started to accelerate & it got removed, many of these same people were pissed at me thinking I was the reason why it got taken down from Facebook. That's my life these days in a nutshell, friends.Oh well.

Mr. Malcolm & his enthusiastic team have done a tremendous job so far with his campaign. There's a palpable sense of excitement & passion for this race that will be upon us in just a few months (primary elections are in May).

"Outstanding," was the response given to me by Ken Malcom, Criminal Investigative Division Captain of the CPD (Covington Police Department), Criminal Justice Professor & declared candidate for Newton Co. Sheriff, when asked how the campaign was going. He went on to say how "humbled by the outpouring of support" he'd seen & how it was a "testament to this movement" we've created.

We. Ken said that almost exclusively during our interview. I literally think I only counted him using the word "I" maybe just twice. That's something I mentally count when I'm talking to folks a lot of the time. Ken is truly a "we" guy, and that's actually a rarity, especially in the political arena. When he was named D.A.R.E. National Officer of the Year in 2003, it was, according to Ken, because "we had such a great team...and it was the city & county" working together. Or, the great successes that have occurred with our local, top-notch municipal law enforcement agency, the CPD, it's because "we have such a great team."


Despite revealing demographic shifts in the home county over the last several years (and the stats & votes simply don't lie - all one needs to do is look at the last 3 POTUS vote totals), many politicos - this writer included - truly believes that Ken has a very good shot at winning this thing.


6. What's the Problem on the Covington Square?

The more things change, the more they stay the same.

In the last three months, four businesses on the Square have closed. Word on the street is that there are no less than five businesses either actively or quietly for sale. While both the cities of Monroe & Conyers, on either side of the home city, seem to be thriving with their downtown business districts, Covington seems to be fading. As one local resident put it, to paraphrase, it seems like things are slipping away...

And please also know that I'm not here to play the "Doom & Gloom" game, either; or, as it were, that the sky is falling. But for me, I go back to the fall of 2016, when it seemed like we were on fire & the sky was the limit. And to see where we are now, compared to then. Well, frankly, my friends, it's kind of disheartening to me.

What possible problematic issue has gotten the most volume these last couple of years? Obviously, that would be when the Square has been closed for filming or for special events. And no doubt, the Witches Night Out dust-up was actually one of the most read stories at TPC last year; however, I can't help but to think that that's an easy target. While certainly the city kind of got carried away last year with filming & closing the Square for special events, a point, off the record, that was ceded by a person with the city, those are just the flash bangs that always bring extra attention. As several have mentioned, the biggest problems facing the Square are more the systemic, everyday problems.


And it's interesting how so many of these top stories this year are interconnected. This summer & fall we had two TV shows filming in Covington at the same time. I received many reports of people completely exasperated with the entire process - Square merchants, downtown homeowners, as well as travelers & people that worked nearby. That, along with many other factors, had an influence on how the city elections turned out. And I'll be the first to admit that this is a REAL problem, one that didn't get properly addressed by the previous council; however, the last thing we need is for the pendulum to swing too far in the other direction. We are The Hollywood of the South, after all, and we need to be mindful of that. We just need some good common sense. So, hold your breath...

Alright, so now we're down to the Top 5! Look for that tomorrow along with the top contributing stories of the year & some honorable mentions. Thanks for reading.