Yes! Gun fans, we have, after too long a pause, another Second Amendment article. Today’s ramble was motivated by one of the most irresponsible and alarming comments heard, maybe ever, in the left’s long war on freedom in the New World. Today, we explore the hypothetical intersection of American gun enthusiasts and nuclear weapons. It’s an improbable discussion. Then again, we live in improbable times.

A while back I laid to rest (so I then thought) any concern over the “nuclear option” concerning private firearms ownership. Little did I know that the subject would charge back into the national discourse with deadly potential.

As ridiculous as it sounds, the highest level of gun control hysteria the commies and globos can mount is the utterly irrational fear that, given an unrestricted right to keep and bear arms, American citizens will resort to the ownership and use of nuclear weapons. Yes, really. I’ve actually encountered that grade-A brand of stupidity live and in person - on a college campus if you’ll believe it. I heard it again, via this video:

If the link is out of order, the video features an interview with anti-freedom activists, likely paid for by George Soros and called up by Hogg the Younger. My March 2018 take:

… one of the alarmed Mad Marxist Marchers asks, “If I can get an AR-15 what’s to stop me from getting a nuclear weapon?” Okay, I haven’t heard that one in a while. But I have heard it. I was asked the same thing about five years ago when I participated in a 2A panel at a college event.

The answers are several but, most simply, it’s: “price.” Price, you idiot. Nukes are too damned expensive for just about anyone this side of a nation-state to afford. My sources tell me that a single nuclear bomb, not including delivery system, prices out at around $200 Million. And that’s for an entity that already has a production system in place. A freelance warhead would range into the Billion$$.

I know these people are somewhat poor in the math skills department. So here’s the juxtaposition: AR-15: $500-$1,000-ish; Nuclear bomb: $200,000,000 – $5,000,000,000-ish. You see, if the Soros Fund or some similar riotous inciter pays you $15 per hour to show up for a protest, then after a few protests you could afford the AR. At that rate, it would take over 13 million hours to buy the cheapest nuke. That’s over 6,000 working years, just a few more than most people can expect to live. Sorry that I couldn’t find a cartoon or pictorial or something.

And that price structure assumes a totally free market with no legal restrictions on WMDs. We kind of have the opposite of that. Given those who could potentially afford such weapons, that might actually be a good thing. All of this assumes one of extraordinary wealth could assemble a willing team of those experts required to build the bomb. It assumes one could locate the rather rare and pricey materials. It assumes a lot. Too much. It’s a non-starter.

Maybe, instead of chasing phantoms of utter ridiculous mania, these people could concentrate on the smaller and simpler aspects of life – like NOT trashing the areas where they protest. Their rights, not yours. Your responsibilities, not theirs.

All things being equal, no American, no private citizen anywhere, is going to possess atomic weaponry any time soon, if ever. And, in hindsight, maybe that’s not such a good thing. Back then I noted that the current owners and operators of the ultimate WMD’s are nation-states. Specifically, the US, Russia, Britain, France, China, India, Pakistan, Israel, and North Korea have nukes. (South Africa joined the club in the ’60s but wisely bowed out prior to turning power over to the bloody-red ANC). Only America has ever used nukes for their intended purpose.

Who, really, is less trustworthy with multi-megaton cobalt bombs than a government, least of all one with a history of actually using them???

That question and this whole near-ludicrous line of thought took on new meaning thanks to the recent ranting insanity of one Eric Swalwell: 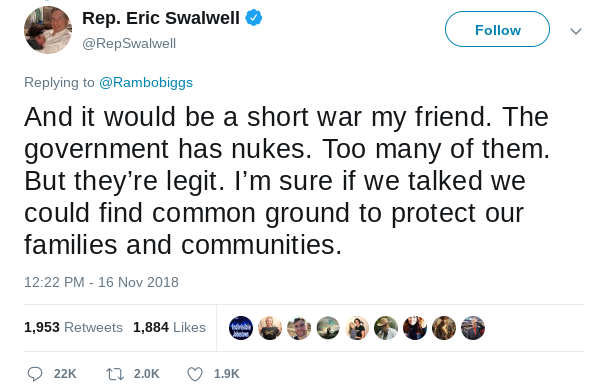 That “Rep.” in front of Eric’s name denotes that he is actually an elected representative. The people of California’s 15th Congressional District saw fit to add this 21st Century Major Kong to the criminal cabal in Washington. He’s a Democrat if you can fathom that. A Democrat threatening to nuke Americans in America. Representing for the bluest of the blue-haired SJW’s, with all the dramatic Khrushchev style he can muster.

“Buuuuuut, he’s wasn’t serious,” the liars of the left seeth. Maybe. We know a thing or two about hyperbole here at TPC. Or, maybe it was a Freudian slip.

Whatever the case may be, the man is overflowing with shit. D.C. doesn’t do short wars. Nearly two decades in Afghanistan and they cannot defeat, with or without their H-bombs, a handful of lightly-armed, scattered goat herds. I like their chances much less against 100 million armed men and women in a nation where the dreaded nukes cannot be used (for risk of frying the users, their beloved Antifa swarms, and everyone else). Also, America no longer wins wars; they don’t even try. The “they’re” in “But they’re legit” (love dat dope rappa-speak from a politi-rat) is slightly unclear. If he meant the weapons themselves, then yes, they are 100% legit. The legitimacy of the government wielding them is about 100% off of a full 100%, however. Whatever he meant, he has no intention of finding anything resembling common ground unless that means the total disarmament of and submission by the populace.

Eff this madman. But, we can appreciate his honesty, regardless of whether he regrets revealing it. The cost factor still renders a nuclear NRA moot. And, within the same country, so long as geographic boundaries remain unchanged, proximity negates the need for mutually assured destruction. Still, this errant comment is something to think about.

Our enemies are ready, at least rhetorically, to destroy us in the event they cannot control us. That’s a notion not to be taken lightly. Even without actual martial deployment, the smoking gun here is a mushroom cloud.