[Perrin Lovett] - Under the Omnibus

Your insane President, when he’s not murdering known diplomats, enjoys signing garbage legislation from the criminal Congress. Last month, at the urging of Bitch McConnell and the other reprobates, The Trump cheerfully signed into law a poorly-cobbled amalgamation of a spending bill. The Empire doesn’t do full budgets anymore, so it’s only $1.37 Trillion at a sad time - generally once per quarter. But the embarrassing expense of evil comes with other costs. The new law also raised the age for purchasing cigars and other tobacco products to 21. And, thank God! Now, I can finally enjoy a smoke without all those damned pesky toddlers roaming around the lounge crying and exchanging germs (sorry, Bess, what they do). The ban, as you may know, is plainly authorized by the Zeroth Amendment of the US Cornsternation.
Tweeted The Trump: “Our beautiful, beautiful children. So much smoke. IRAN WILL NEVER ROLL A CIGAR. My watch. SO SAD. Obama did it too. Yuuge. MIGA.” Ketchup on a well-done steak. 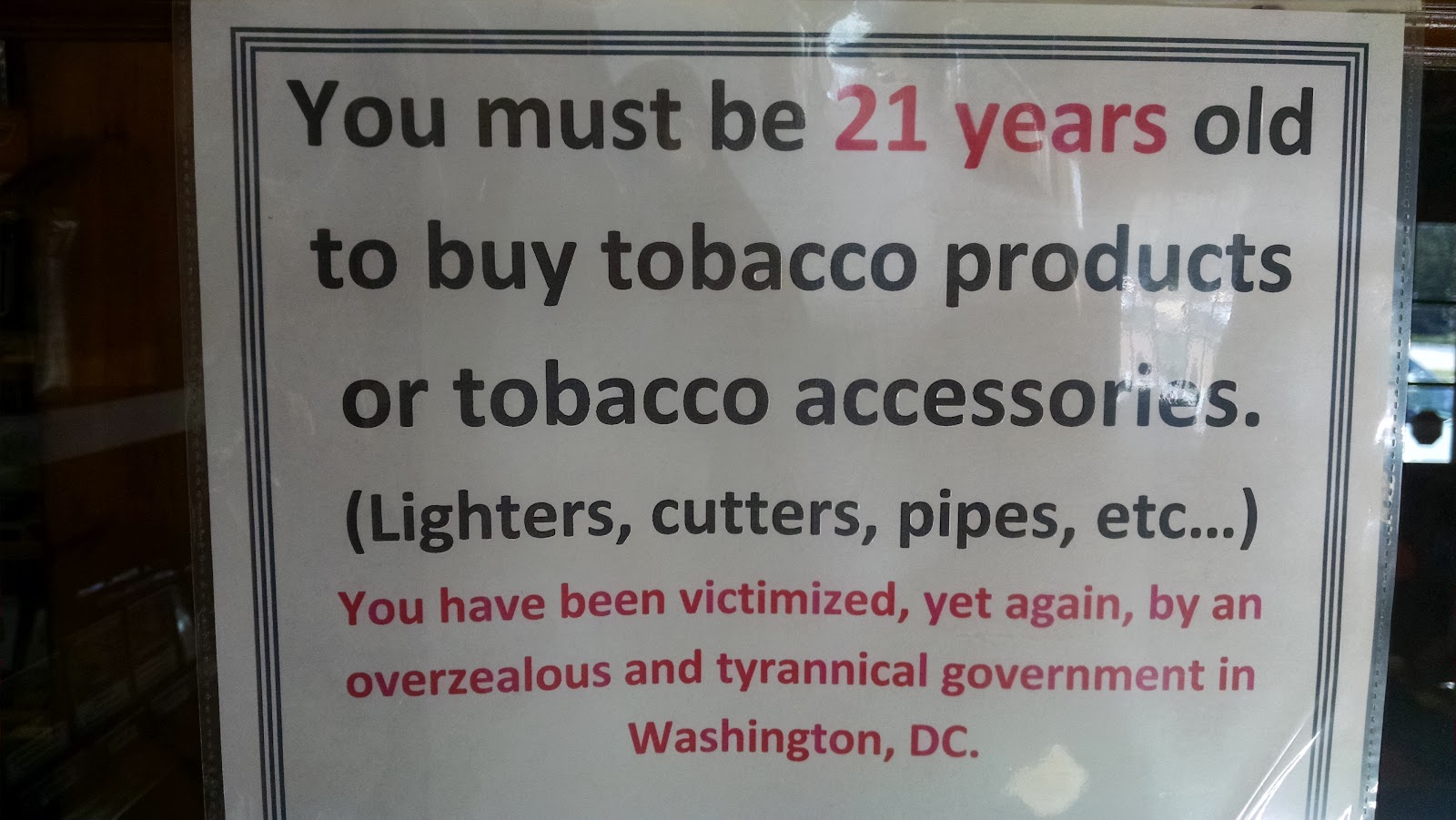 My tobacconist buddy’s new warning sign. Humorous dissent is, for now, still legal.
Building on this trend of creeping incrementalism, a sarcastic state senator in Vermont, John Rodgers, whom I’d kind of like to meet, introduced a bill to ban “children” under the age of 21 from owning or using cellular mind control and tracking devices. Rodgers noted that he wouldn’t even vote for the change himself, stating that he introduced it to make a point. “The kids” can’t buy smokes or beer. Why let them dull their minds and risk their lives sexting and driving? I might suggest a rider to raise the driving age as well.
Mr. Rodgers: please keep this one in your neighborhood. Should Trump, Pelosi, and the other shits get wind of it, they may well try to federalize the concept. I’m sure the CIA-OPA could quickly conjure up a convincing B-movie-like video showing some paid actors trashing an embassy or something because Iran wants to cellularize our youth. My only hope is that they would still allow 5G to proceed apace; in addition to the wonderful biological benefits you’ll soon experience from the well-tested super-duper-micro-hyper waves, you just wouldn’t believe what else they will enable. But, you will.
Anyway, all this got me thinking. Some few of you from time to time murmur that you oppose big government. Yet and still, later this year, you’ll rush right out and cast your votes to keep it around. So be it. I’m here to help, really. The other week, for the first time in my life, I proposed a tax - for the children! Now, I have another idea.
In Japan, they have what they call the 代謝税. Excuse me, the taisha zei. Oops, it’s the METABOLISM tax. A tax on obesity. And it works. Not that they really ever needed it; the Japs are ten times less fat than the grossly obese ‘Muricans. But hey, they’re a neurotic little people and the ‘Muricans exceptional. Over there, the tax keeps the home folks trim and fit by holding the threat of fines over companies and local governments much like the US Empire holds the threat of terrorism and usury over the rest of the world. Residents and employees must comply with very reasonable and age-appropriate waistline requirements or else Tokyo lowers the fiscal boom of doom.
‘Muricans love a direct tax, so I envision an amended 1040 line-item adjustment. We could use the waistline tape-measure, BMI, or height to weight. Either way, with just a $5 per year penalty per slave, we could pay off the imperial debt in a couple of short years. Yes, I know that this one will go as far as my tax on the Fed Creature. In addition to being dim-witted, short-sighted, homicidal megalomaniacs, your politicians, like the rest of you, are a might rotund. They know how their bread is buttered. A LOT of bread and butter too. Oh well.
On a tangentially-related matter - yes, I’m rambling - I recall that a few years ago, a foreign terrorist state came along and burned my homeland and stole my family’s property and liberty. From watching Faux News, I assumed it had been Iran. It was not. It wasn’t Iraq either. Nor Syria. Nor Libya. Nor was it the Koreans, the VC, the Nazis, those svelte island karaoke-lovers, or the dastardly Spanish. It was, in fact, some crazed outfit out of Washington, DC. The more things change… Today, I guess they would use Reaper drones and Rush Limbaugh would praise the acts. Netanyahu would emerge from under his indictment to deny any connection to what he suggested/ordered. The Iranian Parliament was about 159 years late in designating the legions as a terrorist organization.
As I mentioned last week, virtually everything you’re told by the Great Satan on the Potomac is a lie. War criminal and lunatic neocon Mike Pompeo partially admitted to one of the lies leading to the murder of General Soleimani: “There is no doubt that there were a series of imminent attacks being plotted by Qassem Soleimani. We don't know precisely when and we don't know precisely where, but it was real.” It was real in his mind. The precise where and when was presented to Congress. Well, except that nothing in the way of fact was presented; some insults, yes. Senator Mike Lee of Utah described it as: “the worst briefing I've seen, at least on a military issue.”
Read a little of the truth about Soleimani HERE; a little of the truthful, non-Washingtonian fiction HERE.
The gangster administration cannot pinpoint anything imminent about Soleimani or Iran because there is and was nothing to pinpoint. However, in the aftermath, the Iranians had little trouble with pinpoint accuracy. Maybe, just maybe all of this will still serve a greater good, like confining US interests to where they still belong. I’m overly tempted to say, “to hell with the Empire.” Instead, I simply thank Almighty God that its day is almost over.
While we endure the short wait, I’m looking forward to this year’s exciting election almost as much as you are. Per my usual dedication, I will not directly participate. But I will be reporting and opining - playfully if mercilessly. Bring forth the GREAT QUADRENNIAL BLACK MASS of 2020! 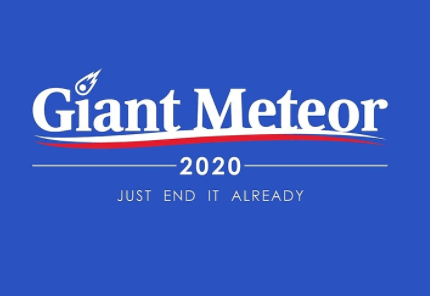 I’m Perrin Lovett and I endorse this oversized space rock.