[Perrin Lovett] - The Seven Laws and the Turnaround of Education 2020

In 1886, John Milton Gregory propounded Seven Laws of Teaching. These have, today, been universally dismissed by the credential-heavy, intelligence-absent cabal that is state education. 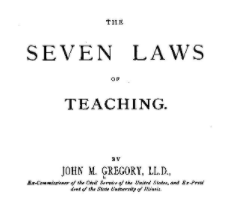 In their defense, whatever else they may be, the students today are eager to learn, at least in the very early years. That’s one of two shining points of pride in the school systems, the other being the dedication of most of the teachers. The shame enters with the handcuffing of the teachers and the deliberate dulling of the adventurous young brains. The system has departed, willfully, from the rules with predictable results.
Here follows a brief summary examination of Gregory’s Laws versus modern reality.
Law One. The teacher possesses complete knowledge of the subject and teaches from literal authority. From thence, the knowledge passes from leader to pupil without diffidence or degradation. Again, today, the teachers generally know and the students, initially, want to understand. The disconnect comes from a foremost emphasis on pedagogy, on the systematization of everything of procedure at the expense of everything material, wherein quality control kills quality.
Law Two. Keep the class centered on the lesson. Do not proceed without the full attention of the students. This is today, completely lost after maybe the fifth grade. So many years of command and control have turned off the child’s mind at the worst time - when hormones commence natural interference. Strategically, all is already lost. Tactically, more attention is paid to phones and games and other instruments of immediate satisfaction than to the lecturing or questioning instructor. The repeated Socratic inquiry is met with blank stares and grunts of “Huh? What?”
Law Three. Communicate clearly in a language known to both student and teacher. This is a challenge under any circumstances, given the gap between the ages and experiences of the two groups. It is made much worse today by the general loss of literacy skills (reading and writing) and SPEAKING skills among both groups. In the near future, any instruction may be impossible as the grunting and distracted students of today attempt to educate future generations of even more confused grunters.
Law Four. Through easy, natural steps, build new knowledge upon that which is already known. We used to call this cumulative learning or, simply, building blocks. Today, there is, at just about any given level, nothing upon which to build upon. Without Sally, Dick, and Jane, there is no progression to Bunyan, Shakespear, or Flaubert. Without 2+2, there is no quadratic expression nor slope differentiation.
Law Five. Using the child’s natural curiosity, push him to explore and understand the truth as, or even before it is presented. Channel the energies, so to speak. Elementary-aged children still constantly exhibit the natural inclination to gain the wonders of the universe. However, in a system bent on crushing such possibility and replacing it with fear and mediocre complacency, there is little to channel even if there is a direction in which to flow.
Law Six. Mandate the reproduction of acquired knowledge, by the student, in a manner of her expression and with words of her own. The children should make the subject matter, whatever it is, their own. This step requires subject matter, energy, interest, and common language, all woefully lacking today.
Law Seven. Review, review, REVIEW! Build what follows upon what already exists and is plainly understood. This is replaced today with TEST, TEST, TEST! While a test, generally at the end of a study, serves to confirm understanding, we have reached the point where the test itself is the course of study. The French concept of le Bac comes to mind as a proper example - the finality of enterprise with confirmation of success or suggestion of needful remediation. In American schools, there’s the teacher’s biology test, the local system’s assessment of skills gained from the teacher’s biology class, the state’s standardized test of the same, outside standardized testing of the same, and more, in addition to testing of the teacher’s test. And, of the teacher. Test overload, with or more likely without underlying factual comprehension.
Why are these laws out of fashion? Simply put, it’s because they are aimed at literal education. That’s not the goal of modern schools. They serve two purposes: 1) fostering listless conformity, and 2) providing make-work for nit-to-mid wits. As when any industry descends from an enterprise into a racket, two classes of people evolve - doers and parasites. Given enough time, the parasites take over, outnumbering and overpowering the doers. In education, the doers are the teachers. The parasites are the educrats, administrators, and hangers-on.
Nigh on two years ago, I regaled you with news of a new parasitical office in Georgia education:
In Georgia, they suck so bad that, in 2017, the Gold Dome Goon Gaggle gifted the people the State School Turnaround Office. This new agency is more than an admission of failure. It’s also a makework program! (Peruse their website). Therein they state six focus features, which I herein address and [render to plain meaning]:
Prioritization for grants - [Gettin’ that graft on!]

Support from an Improvement Specialist - [Makework]

Support in implementing a school-driven improvement plan - [This nebulous “plan” is the only point arguably related to improving education. Why is its implementation dead last on the list?]
Only a year old, the Office is already “helping” the failing schools of Richmond County. Well, not all of them. I think the magnet schools and an IB program aside, all RC schools - by an honest metric - are failing or failed. (“All” means 33 elementary schools, 11 middle schools, 8 high schools, the 4 magnets, and 3 “special” schools). That’s a total of 59 schools in trouble, minus a few exceptions. But, the State will just help the ones on the select list of special failures. Oops. Not all of them either, it seems. For now, only six out of thirteen schools will be “helped.” Screw those other kids!
It turns out that I was a little overly optimistic. The mantra was really: screw all the kids! The office only attempted to “help” less than twenty schools state-wide, out of 105 that were nominally eligible (out of many, many more that are technically failed). But, it seems that predictably all the grafting and make-working got in the way, to the point that the office has been closed. Further, the chief turnaround make-worker has resigned under a cloud of impropriety and incongruence. Imagine that. These news items are just as well; I again looked through the office’s website and I cannot find a single thing that relates to education. However, under the “Meet the Team” tab I did discover confirmation of Tom Ironsides’s proclamation about the prevailing demographics in educational administration, as mentioned sarcastically in THE SUBSTITUTE.
I also noticed several more plainly disturbing things. If you’re in the child education business, and if your partners include a likely CIA front company and some outfit with a logo strangely reminiscent of NAMBLA’s symbolism, then you may be setting up for failure. Wait a minute! That could be the new motto for the schools: Failing every child, every day, in every way! Your taxes, by the way, pay for all this nonsense. But, it doesn’t have to be like this.
What to do? Abolishing the schools comes to mind as the only sensible outcome. The Georgia public schools, as a whole - like most across the nation-shaped kind of place, are terminal and cannot be turned around. Previously, among many other solutions, I have sung the benefits of the classical education model. A glimpse of hope is provided by Magdalen College’s (NH) PARTIAL great books reading list. Instead of spending millions of dollars on failure, idiots, consultants, and bafflegab Powerpoint maps to nowhere, spend a tiny fraction of the money on books! There is no reason why a younger child cannot get a head start on some of these titles unless of course that child is trapped in a Georgia public school. Hey, y’all! Turn that around.
In Other News:
Impeachment: the word of the week is “Supermajority.”
Corona-virus: Wash your hands, do the math, and relax.
The Masters: 10 weeks, baby!