a piece by Marshall McCart

I’ve oftentimes thought about what really influences and makes the person they become. Naturally it’s a lot of things, I think. First and foremost, it seems obvious that family and upbringing are the two most important things, and I was very fortunate in that regard. My parents were great, as were the rest of my family, and I was doubly blessed to have Reba McCart, God rest her Soul, as my Grandma. Schooling and environment is another key piece of the puzzle in my estimation. To use a line that may seem, politically, to not fit for me, I do believe that it really does take a village. Having that city and county-wide system of support is crucial. And growing up and reaching my formative years in Covington and Newton Co. back in the early and mid 80s was a pretty good thing. At that time, for those of us in town, you went to Ficquett and then you went to Sharp. The bus wasn’t really necessary. We could just walk or ride our bikes. In our middle school years once we had a little money in our pockets, we could head over to City Pharmacy and get a vanilla malt, or maybe head to People’s, then head over to the Library and read all the old Rolling Stones about Led Zeppelin, Pink Floyd and The Who. Sometimes we would maybe read books, too. Quite often we were told to be quiet… But a big thing, for me at least, and I think for a lot other folks as well, are some of those early influences. You could maybe even call them heroes. And three of the biggest ones for me were the ones I have listed as the title of this column. Looking back on it, I truly think these three gentleman had a major, lasting impact on the person I would become.


|||||||
I’ve always liked Kevin Butler’s encapsulation of the essence of Vince Dooley. In an interview once, Kevin - probably the greatest kicker who ever played college football - said you always felt good with Dooley on the sideline. You always felt that he had something up his sleeve, or some contingency plan, where he was  going to know exactly what to do when the time came. And it certainly seemed to be that way. In that four year period from ‘80 to ‘83, we won a national championship and three SEC titles and only lost four times and won countless super-close games that sometimes maybe we had no business winning. I always think about the 1983 season. Herschel, the greatest to ever play the game, had gotten caught up in a trap and had to forego his last year of eligibility. And, no disrespect, but John Lastinger was our QB. This is the same guy who kept pleading with Coach Dooley that maybe somebody else should play that position and lead the team. Well, it was a beautiful ending to a beautiful season when Lastinger made that beautiful option run to beat the heavily favored Texas Longhorns in The Cotton Bowl. Honestly, I still wonder if that was our best win from that entire run. As a young kid and a huge Georgia fan, Vince was just always kind of this larger than life character. He seemed to always convey confidence and wisdom. I used to really enjoy watching his TV show where he’d recap the previous game. He was a great coach and was a major influence for me.

I’ll never forget the first time I heard Jerry Jeff Walker. My Dad was a big fan and had seen him live a few times. Finally he brought home a cassette tape. I was immediately hooked. Seeing Jerry Jeff’s picture, reading about the Great Gonzos, and seeing some of the song titles (especially the one about doing something in the wind), and I was captivated. And buddy, once I started listening to it - I was for sure hooked! “Up Against the Wall, Redneck Mother,” “Gettin’ By,” “LA Freeway,” and all the rest. “Gettin’ By,” by the way, is my unofficial theme song. As the years have gone by I’ve seen Jerry Jeff myself a couple of times and own several of his albums and listen to him quite frequently. To quote a line from the Guy Clark song, “Desperados Waitin’ on a Train,” that Jerry Jeff recorded - “to me, he’s one of the heroes of this country.” 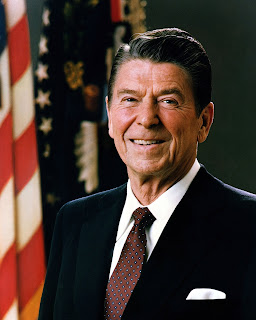 I'm a Proud Gen X/Reagan Kid
Me and a buddy of mine have spoken frequently about a sub-set of Generation X that we are both members of that we call “Reagan Kids.” Reagan Kids are those of us who were basically born in the 1970s who were reaching our formative adolescent and early teen years when the 40th President of America was in office. It was in the summer and fall of 1984 that I came to the realization that I was a nine year old political junkie. I was really plugged in to the election. I vividly remember when Reagan was asked about age being a factor in that campaign and he made the classic line about not wanting to talk about Walter Mondale’s youth. I was basically the grassroots coordinator for the Reagan/Bush ‘84 campaign at Ficquett. We were having an in-class election and I was actively doing sampling and drumming up support. A good friend of mine at the time told me he was planning to vote for Mondale because that’s who his Mom was supporting but I was able to convince him to get behind Reagan! So Vince, Jerry Jeff and Ronnie as three of my biggest influences. That may explain a few things... - MB McCart