[Perrin Lovett] - The Old College Try: Nation Concentrates on One of Many Higher Ed Scandals ***With Mueller Report Note***

A week or two back, the news broke of a DOJ crackdown on several score celebrities, all accused of bribing and lying their children’s way into elite colleges. The better-heeled Americans allegedly paid big money and told tall tales about Little Suzie; the colleges allegedly lapped it all up.
Some actresses I’d never heard of and some others stand indicted, facing prison time. Some of the children (not indicted) are “influencers,” celebrities because they are celebrities are some such rubbish. People like this undertake such nefarious actions because, A, they can, and B, because they’re kids were not bright enough to qualify otherwise.
Announcing the investigation, U.S. Attorney Andrew Lelling made an interesting statement: “For every student admitted through fraud, an honest and genuinely talented student was rejected.” My thoughts at the time:
How is this scam any different than that of affirmative discrimination, outside of the massive difference in scale. Genuinely talented students lose out by the thousands or the millions, year to year and generation to generation. Just replace “rich parents” and “sake of their children” with “the state” and “globalization.” Fraud is fraud, even in a conspiracy theory. Nice of someone to notice. May the sentiment and the action spread.
And, for what it’s worth, I’ll bet a dollar to a Yale diploma that most of the elites being charged here generally support the government’s insidious programs as well. The enemy’s consistency again.
The fallout includes at least two civil suits, one by potentially negatively affected students and one by a parent. One suit seeks $500 Million in damages. I’m not sure if that’s about justice or about ju$tice. Time, maybe juries, will tell.
I’ve been thinking further about this scandal and reading the thoughts of others too. The celebrity trash scandal is but one of many afflicting a damaged system. Some of the others include:
Partially Systemic Nepotism
Or, as some folks call it, blatt. This is part of the accusation against Harvard over the ancient school’s admissions policies. The suit was filed by highly qualified (East) Asians, who were given the shaft in order to admit applicants of lower academic quality. The theory goes that certain, special people have wormed their way into the process. They thereby do for their offspring what high-income, low-IQ people do, except the Harvardites don’t have to lie or bribe, already being embedded. Sometimes purchase money is in order, though it’s well masked to avoid scrutiny. The Kushner family comes to mind. Asians are the plaintiffs; whites should take note of the discovery and outcome (if any).

Veritas indeed.
The Athletic Racket
This one is well-known and apparently beloved or forgiven by the masses. The star recruit who can’t read and can’t spell “m-a-t-h” somehow not only gets in but gets in with a full ride. My dad used to occasionally deal with this anomaly at Mississippi State. “Tyrone,” the standout _____ position player, did nothing all semester and failed accordingly. A panicked coach would call our house to cajole or intimidate - something about academic eligibility. Then again, it was really hard to cajole or intimidate a 280-pound Marine with tenure, guns, and an ultra-high IQ.
The feetsball shuffle is (sometimes) part of the overall program of fraud known as ...
Affirmative Discrimination
You know all about it. Someone’s ancestor, like all of our ancestors at some point, had it rough. However, unlike us, the lucky disparate impactors get a pass - check a box and get a 300-point bump as needed.
Sandra Day O’Connor told us, in Grutter v. Bollinger, 539 U.S. 306 (2003), that this theft of opportunity, while historically necessary and permissible temporarily, should have a time limit. She’s retired now and I’ll call it … times up for affirmative fraud.
Systemic Fraud
This is the biggie. This is what some of my other education columns have partially addressed. Just like the government K - 12 schools, many (or most) state-run colleges and more than a few private schools, especially the “elites,” are corrupt to the point of no return. Their own numbers and policies betray them.
Dr. Walter Williams (as always!) did his part to expose the mess.
According to the Bureau of Labor Statistics, 70 percent of white high school graduates in 2016 enrolled in college, and 58 percent of black high school graduates enrolled in college. However, that year only 37 percent of white high school graduates tested as college-ready but colleges admitted 70 percent of them. Roughly 17 percent of black high school graduates tested as college-ready but colleges admitted 58 percent of them.
I think I can guess how two other demographic groups fit in. Hispanics do a little better than blacks and Asians do a lot better than whites. Collectively, this is why 40% of new college students require remedial classes. IF they pass those, then they embark on a curriculum journey that has practically reached the limits of dumbing down. The Greeks were all gay. Washington was an oppressor. Men are toxic. -4x² - 7x +12 = whatever you feel like today, Xir. Your $100K student loan is very difficult to discharge in bankruptcy court.
I was reminded of this phenomenon about the same time Williams was drafting his article. My honorable duties recently took me to an all-American high school. On the wall a poster boasted of goals like composite 20 ACT scores, composite 1000 SAT scores and 80%(?) college acceptance. (This is one of the typical schools were senior proficiencies, as-is, hover around 30% while 90% graduate).
***Related Side Note: While still holding onto some hope, I reevaluate my previously optimistic assessment of Gen Z.***
The rub is that a 1000 score on the SAT and a 20 on the ACT does not (did not) qualify one for college (unless barely), both indicating a “normal,” and maybe a borderline higher academic intelligence. Some things aren’t meant to be. Or, they weren’t meant to be.
WHAT TO DO?
Okay, what to do if you’re not wealthy, well-connected, or historically spit-upon? Assuming your child is bright, with an IQ of 115-120+, and not a five-star running back, look at smaller, mostly private schools that emphasize actual teaching and actual learning. Read Out of the Ashes: Rebuilding American Culture, by by Anthony Esolen. 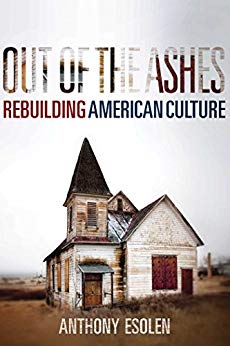 Amazon/Regnery.
Pay attention to what he says in Chapter Four. He heaped the praise on tiny and truly Catholic Saint Thomas More College in New Hampshire. He’s on the faculty now. Bright young people can be well educated and well rounded. And, there are more of these good schools than you think. Find one. (And, there is nothing wrong with - in fact, most things are right with - trade schools and community colleges). Forget the mainstream frauds and scandals.
EXTRA!!!
***Mulling the Mad Mueller Mortification Matter***
Russia, Russia, Russia!!! Since I first drafted this, two op-eds have come in at TPC in re the same. Many thanks to Andy Allen and Bobby L. Nettles for the excellent commentary. My take? Everyone knew this story was complete bullsh!t from start to finish. Now, it’s official.
No Collusion (by Trump) and No Obstruction.
“The Justice Department said Sunday that special counsel Robert Mueller’s investigation did not find evidence that President Donald Trump’s campaign “conspired or coordinated” with Russia to influence the 2016 presidential election.
Mueller also investigated whether Trump obstructed justice, but did not come to a definitive answer, Attorney General William Barr said in a letter to Congress summarizing Mueller’s report.”
No “definitive answer” means “no charges” for obstruction:
“Evidence gathered in special counsel Robert Mueller’s investigation ‘is not sufficient to establish’ that President Donald Trump committed obstruction of justice.”
THE BARR LETTER TO CONGRESS
Read and decide. Now that this matter is behind us, I assume we can start: 1) building the wall; 2) draining the swamp; 3) some treason trials, and 4) finding a jumpsuit for Hillary. I’ll hold my breath.

The final word, from James Woods: 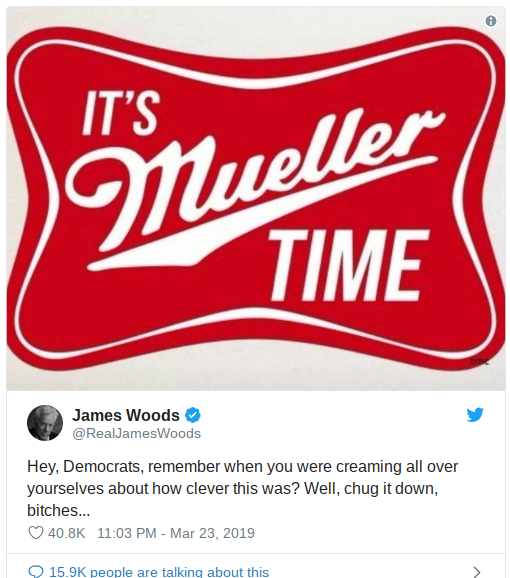