[Perrin Lovett] - The Most Special Resolution in the World: House Resolution 183 (2019), The Craven Admission of Total Failure Act

*ed.note - as is always the case, just a quick reminder that the views expressed by author P. Lovett do not necessarily represent or reflect the views of The Piedmont Chronicles, nor its staff or Editor, M.McCart. This piece is...heavy, and could very well be construed by some to come across a certain way; however, as a fierce, fierce defender of the 1st amendment, I never had any doubt I wouldn't publish it. Or, if you will, I may not agree with what you say, "but I'll defend to the death your right to say it." As always, we appreciate you reading The Chronicles. - MBM


The Most Special Resolution in the World:
House Resolution 183 (2019), The Craven Admission of Total Failure Act
Not too long ago, freshman Congress Critter Ilhan Omar (D-Somalia) Tweeted something about “AIPAC,” or the American Israel Public Affairs Committee. It was something about the inordinate amount of influence the group and its constituents wield in the United States Empire. The lovely little lady from Mogadishu (really) has since deleted the Tweet, but not before it caused a considerable stir amongst the perpetually perturbed - a stir replete with 10,001 cries of “anti-Semitism.” You might have heard something about all of this.
What better way to refute claims that Jews in America hold too much power and influence than to have the entire American House of Representatives [SIC] vote to condemn one woman for daring to suggest that Jews in America hold too much power and influence.
That’s just what they did. Find ye HERE the Roll Call vote, number 108, 407 - 23 in favor of House Res. 183, the waaaay-too-long-entitled Condemning anti-Semitism as hateful expressions of intolerance that are contradictory to the values and aspirations that define the people of the United States and condemning anti-Muslim discrimination and bigotry against minorities as hateful expressions of intolerance that are contrary to the values and aspirations of the United States [Act].
The 23 rodents who voted against the Resolution did so because they felt the measure should have concentrated solely upon “anti-Semitism,” rather than on the laundry list of grievance groups actually included. The 407 rodents who voted in favor - including Omar (to her credit?) -  did so only after adding a laundry list of offended minority groups. (More on that in a moment).
Not to suggest, in any way, that Jews really do wield ridiculously outsized power in America, this is the second time, this year, Congress has entertained legislation to affirm Jewish supremacy. The first was S. 1 (2019), which passed the Senate 77-23 and which, should it become law, could conceivably outlaw columns like this one. (Your author simply quakes with fear). Yes, as the numbering insinuates, this was the first Bill brought in the Senate this year - a Bill dedicated to the authority, the supremacy of a foreign power. America first?
Now, for the laundry list:

Whereas adherence to these principles is vital to the progress of the American people and the diverse communities and religious groups of the United States;

Whereas whether from the political right, center, or left, bigotry, discrimination, oppression, racism, and imputations of dual loyalty threaten American democracy and have no place in American political discourse;

Whereas white supremacists in the United States have exploited and continue to exploit bigotry and weaponize hate for political gain, targeting traditionally persecuted peoples, including African Americans, Latinos, Native Americans, Asian Americans and Pacific Islanders and other people of color, Jews, Muslims, Hindus, Sikhs, the LGBTQ community, immigrants, and others with verbal attacks, incitement, and violence;
… blah, blah, blah, more bullshit …
Resolved, That the House of Representatives—

(1) rejects the perpetuation of anti-Semitic stereotypes in the United States and around the world, including the pernicious myth of dual loyalty and foreign allegiance, especially in the context of support for the United States-Israel alliance;
…

Tolerance and the heart of justice. Principles vital to the progress of the American People and the diverse communities and religious groups of the United States. African Americans, Latinos, Native Americans, Asian Americans and Pacific Islanders and other people of color, Jews, Muslims, Hindus, Sikhs, the LGBTQ community, immigrants, and others. Hmmm. White supremacist exploitation the culprit behind black Muslim Tweets.
Before one comes to the Fourteenth Amendment or even the First Amendment, one necessarily reads the Preamble of the Constitution, which tells one exactly who these “Americans” are. They are the POSTERITY of the Founders. This is confirmed by Preamble, The Declaration of Independence, the unanimous composition of the Founders, and by the original Naturalization Act of 1790. “Americans” are - or were - white Christian Europeans of good character, of English origin if at all possible.
The one group not included in that laundry list of sorrows is the very same group who constitute the actual, intended citizenry of this Nation. Interesting, and an admission. Despite Omar’s words, were We really the target? Are we the “white supremacists” they mentioned? Projection much?
Hate crimes are real and they do happen. Just the other day the police arrested a black transvestite “woman” for pepper-spraying some white people in an act of blatant hatred. Oops. That does not help the admission...
Another admission comes from the blather about “dual loyalty” and “foreign allegiance.” Those phrases bring us back to the (((Jewish))) question of American politics - there, I’ve used (((echoes))) for once - and that disproportionate wielding of influence.
Omar’s be-jilbab-ed Tweets must have hit close to the mark in order to garner such rapid and total reaction. Her hitting of a nerve coupled with the chosen (heh) response suggests at least a grain of truth about that nerve. So … if the truth is “anti-Semitic,” then what that makes the Semitic would echo (ah) a certain strain of consequential quotes about “Jews,” not least that contributed by a certain Carpenter from Galilee (think John 8:44).
The truth assumes much. But, still… Why the big deal if it’s not a big deal? Maybe it is? 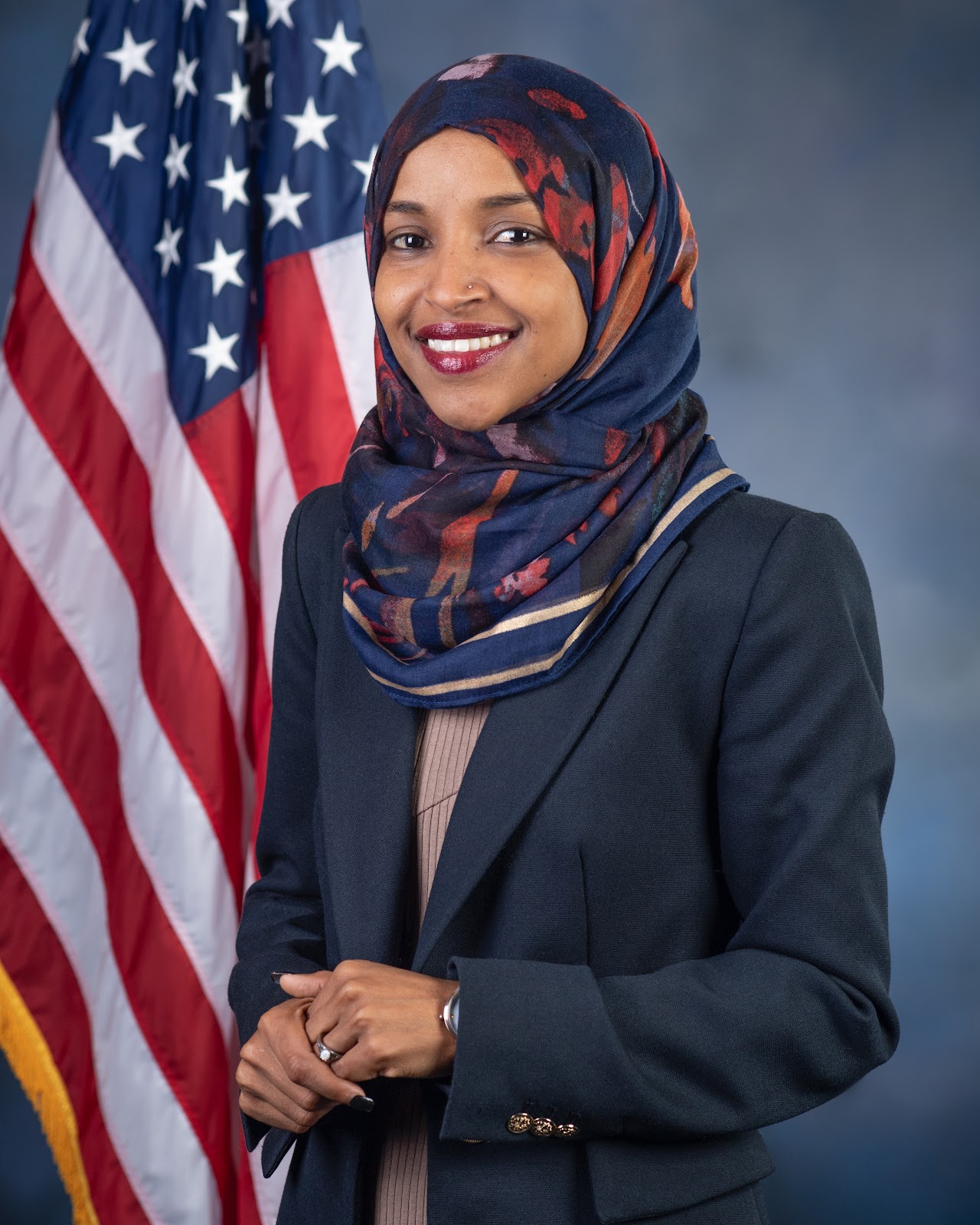 Could it be that a black, Muslim, migrant woman from Somalia is the last voice of the American People??? BTW, NO and NO! Mo Brooks of Alabama was the only one speaking up for the Posterity though he ended up voting against Us.
The whole episode raises (or dodges) a dichotomy: there is a difference between “The Jews” of the American diasporan variety and “The Jews” of Zionist Israel. Simply put, the latter have skin in the game. They’re real Jews proudly living is a Jewish ethnostate. They take it so seriously that they, by law, forbid their elected leaders to hold dual loyalties, dual citizenship, and foreign allegiances. They also have a wall. And, they have a “law of return,” to encourage all Jews living outside Israel to move in - for now.
Oh, and they also don’t mince words to mask their own supremacist views. Quoth one elected Israeli, with no dual loyalties, MK Miki Zohar (L-Negev): “What can you do? We were blessed by God… and I will continue to say that at every opportunity,” he said. “I don’t have to be ashamed about the Jewish people being the Chosen People; the smartest, most special people in the world.”
If the most special people in America have it so bad, then why not move to their homeland and be free of all the anti-Semitic Tweets? Answer: they like it this way. It’s just part of the cost of the progress for the (real) American People that the Chosen are so invested in. Their aim is, and has been, to reform the United States of Diversity into a giant mass of minorities - see the list again - into which they are just another minority group. Well, one group (the others were added for cover) with inordinate power and influence. In addition to AIPAC, they also have: disproportionate authority in Congress, the courts, and the bureaucracy, control of the Federal Reserve and the banking industry, massive corporate control, major control of academia, and near-total control of Hollywood, entertainment, publishing, news, social media, pornography, pop culture, etc. One can plainly see how ridiculous Omar’s assertions were in retrospect.
This fleecing of the flock, and then complaining about anyone noticing, is part and parcel of the new Amerikan values, the “Judeo-Christian” values they talk about or lie about.
For what it’s worth, there are three groups that who be mightily upset by the prospect of American Jews suddenly removing to Israel.
First, and least, would be the “Christian” Zionists, those Churchian adherents of Abraham over Christ who work a special angle. They would be saddened by the move, accepting that they could still send money and soldiers to the Levant until such time as the Rapture makes that unnecessary.
Second, would be American Jews themselves, mostly holding both the Talmud and the Kabbalah for temporal convenience only and with no interest in adding their very fragile skin to that very real game somewhere between Egypt and Jordan.
The third and most vociferous group to oppose settling American diasporans in Israel would be Israelis. Given all the trouble, here, one could hardly blame them, there. They still, for now, call for Aliyah. But, amendment of the law is a possibility. That window may close with historically predictable consequences.
Back home, in America, today, this debacle and Resolution illustrate the changes. The new character of the new America, wrought by the interlopers, works against them and their place in the minority show. “Six Million!” works well against any criticism from white Boomers. It fails utterly against the new arrivals. Why should I care, at all, about anything that happened 80 years ago, in another country, by one people to another people, none of them mine?! That’s Omar’s question. She and her kind don’t care. And, they’re doing their part in taking over. Progress.
Voltaire was on to something: “To learn who rules over you, simply find out who you are not allowed to criticize." Then again, that may no longer matter. The new, not-Americans simply do not care. Period. The legacy Americans, who should care, are still largely asleep. Will they wake up before the Empire crumbles under the weight of the new Tower of Babel? Probably not.
These are interesting times, hilarious if alarming, for those who are awake. These are your national affairs.
***The head cold seems to have cleared out now. Never ordinarily being sick, I love it - it lends a reminder of humanity to the curmudgeon's mind. But … it’s good to be back! Next week we could delve into the invasion (again), the lack of any emergency response thereto (again), the demise of the Empire, the never-ending attack on guns, the debt, books, the trust-busting of Farcebook, or anything else. Stay tuned.