[Perrin Lovett] - The Magic and Majesty of Tweetsie Railroad

*Author's note: The following article originally appeared at my blog, back in December of 2015. Yes, it’s a rehash. But, the titular subject warranted a brief mention, here, a few weeks back. Wanting to elaborate, I spent the better part of an afternoon digging up this forgotten gem. (That sounds better than “I was busy and had a head cold…”).
When it chances to rain I sometimes don a high-quality, hooded raincoat emblazoned with a “12” logo patch. People occasionally inquire as to the meaning and origin of the garment. I love telling the tale.
Tucked away in the Blue Ridge Mountains of North Carolina, about halfway between Blowing Rock and Boone, just off U.S. 321, there is the most remarkable hideaway. There one will find a tiny, tiny little (very small) amusement park on the side of a mountain.
Disney World it most certainly is not (praise God). It is a chapter from an older, homier book of Americana. It may be the ultimate roadside destination, a place to shame South of the Border or Wall Drug. Tweetsie Railroad is one of my absolute favorite places anywhere. Time stands still in the mountains.
Tweetsie started in the 1950s and, instantly finding perfection, hasn’t changed.  I first went there in the very late seventies and was awed. Many years later, when my daughter was a tiny tot, we decided to visit the park for a family getaway.  I was over-awed this time. Tweetsie was (and is) the only place from my childhood that is exactly the same as I remembered it from my youth. It literally converts you into a little kid again.  More magical than any kingdom.
The name from crafted from the defunct East Tennessee and Western North Carolina Railroad. Tweetsie is also the name of old No. 12, the park’s flagship steam locomotive. Yes, they have real, full-size, and fully functional trains. No. 190, The Yukon Queen, puffs along on alternate days. The trains are the preeminent attractions. 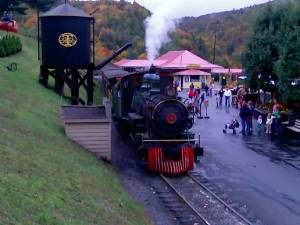 (No. 12 in the station. Picture by Perrin).
All day long these fire-breathing beasts of iron and steel haul delighted families around the mountain. The passenger cars are manned by cowboys. About a third of the way around the train stops at a little village. The cowboys get off and engage in gunplay. Sometimes it’s the result of a robbery. Later the show stops at a fort where another battle unfolds against a tribe of hostile yet inept Indians. Cowboys and Indians in the 21st Century. The fun is neither political nor correct, yet fun it is. 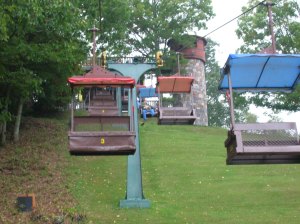 (Picture by Perrin).
A chairlift carries patrons to the top of Miner’s Mountain. There, and down below, are a variety of shows, acts, rides and entertainment. Up top the summit is ringed by a smaller train ride. The smaller train enters a tunnel and stops so folks can watch mice ride around on an even smaller train. A train within a train within a train.
Behind the mine tunnel is a petting zoo filled with animals. Good, inexpensive carnival food abounds. Midway up the mountain is an arcade, a ferris wheel and a race track. Special occasions are common, including dog shows and Thomas the Tank Train. Thomas is there in the late spring: full size too. He’s propelled by No. 12 at Mr. Tophat’s request.
Tweetsie is open from early April through Halloween. UPDATED FOR 2019: Opening Day is April 5th. Tickets are $50 for adults and $32 for children (toddlers enter for free). Season passes are $125 an $85, respectively.
Fall is, in my opinion, the best time to visit. The scenery is perfect and the temperature is always ten to twenty degrees cooler than the lowlands. The park is open at night around Halloween for the Haunted Train experience.
This is truly an old-fashioned family-friendly place. There’s something for everyone. I have been many times during different seasons and always had a grand time. The type of thuggery and foolishness too common these days is simply not tolerated. I’ve never seen anyone out of line. I suspect the cowboys would shoot any hooligans.
Accommodations, from rustic cabins to modern hotels are all over within a ten-mile radius. Boone and Blowing Rock offer numerous other fantastic activities. Everything up there is clean, safe, refreshing and jolly. The smell of wood fires, pumpkins and apples permeates the air. The sounds are of laughter, wind in the trees, and falling water.
Tweetsie even boasts a number of convenient Cigar smoking locations. The towns are also Cigar friendly. Boone hosts a few small tobacconists while the gas station in Blowing Rock has a well stocked Humidor and a decent wine selection. Good food and ale is available in plenty. Blowing Rock even has a local brewery. The place to eat at is The Peddler Steakhouse. They have the finest beef and fare and are operated by attractive coeds from App State.
Plan a trip if you can. Again, I really recommend the fall. Do be mindful of Appalachian State home football games on fall Saturdays. Even on game weekends, early planning will provide a room reservation. I think the place would even benefit the modern micro-aggression obsessed set. Initially, duct tape could ensure they don’t complain about the cowboys and Indians. The tape could be removed when they start laughing along with the normies. Highland therapy for the soul. Perfection incarnate. Plan a visit soon.
*The National Affairs meddling shall resume next week.
- Perrin Lovett