Your C.F. Floyd Writer of National Affairs took a few days off, necessary for his travels to Nebraska and the inaugural “Fuel Truck Solution to Political Problems” conference and chemistry lab. The author of today’s article is none other than that internationally-renowned observer and prognosticator of societal critique, dashing darling of the behance fashionables, Mr. Honk Honkler.*
*****
Greetings, friends of the inglorious Alabama lowcountry. As an impertinence, I once visited Dothan. A fine town, if that’s what you’re still calling it. My name is Honk Honkler and I am honored to fill this nugatory role for your reading rancor. I’m a really big fan of The Fremont Prodigals. For the opportunity, many thanks to Mr. N.D. MaLart and Perret Lobell, good friends whom I have known since last Thursday. My “regular” job, you didn’t ask? I play the role of Virgil, guiding those whom I may through the inferno of Clownworld. Come along, now, our journey begins. *Honk, Honk*
It Almost Always Starts with a Ship
These wars for money, that is. Think about it (if that’s possible). The Star of the West. The U.S.S. Maine. The Lusitania, U.S.S. Arizona, The Maddox. U.S.S. Liberty (Oops! DO NOT think about that one!). U.S.S. Stark. Et cetera. Et cetera. Now, today, thanks to John “It’s okay to lie about war” Bolton, the current et cetera is the U.S.S. Abe Lincoln, CVN-72.
As part of routine commercial banking enrichment operations, the 100,000-ton floating target has navigated to the Persian Gulf and into the sights of Russian, Chinese, and/or Iranian ASMs. The neocons aren’t even bothering to disclose the underlying lie this time. Whatever it is, rest assured it’s important - something about the free world or your children or protecting our nebulous interests or allies. Iran is a threat to something or someone, somewhere. Hezbollah. Uranium. Cakewalk. Ilhan Omar. For sure, no Amerikan sons or daughters will be imperiled by the Imperial imperative.
*Honk, Honk* 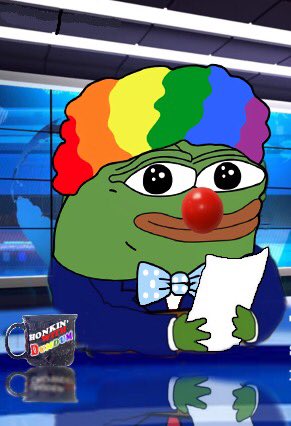 (Picture from the office of H. Honkler).
From Border Security to Boarder Security
In 2016, out of respect for and in celebration of the virtues of voluntary democratic slavery, the wise people of toponymic Columbia elected Donald “Art of Grab ‘Em by You’re Fired” Trump as Supreme Leader. Part of his pitch - the primary overhand lob - was securing America’s porous border with the Estados Unidos Mexicanos. He said something about a wall or bollards or some traffic cones. Someone was going to pay for it.
Someone is paying, alright. Someone like you. Not for a wall, nor even a short, rusty fence. Rather than halting the flow, as part of his one-year, wait and see, do nothing "State of Emergency," Trump accedes to roughly 1 million illegal entries each and every day. And, rather than have them all bunch up at the border, he’s decided to ship the new Amerikans here and yon to towns precariously close to wherever you live. You’ll get the bill for the room and board and much more. Please note, this is ONLY until the “asylum” claims are heard by a competent court of law. (Wink, Wink). Look for the hearings to happen about the same time that the truth about Iran falls out of Bolton’s mustache.
*Honk, Honk*
Mindlessly Drifting “Opposition”
America has two totally different and independent political parties. Honest injun - dot or feather, it doesn't matter anymore. The Democrats, led by Nancy Pelosi or AOC or “Friendly Hands” Biden or somebody, are going to fix everything just as soon as they figure out what planet they’re on and what century it is.
Russian collusion was real. Just look at the Uranium One … nevermind. But, it’s important to impeach Barr, maybe Mueller, if you’re going to subpoena Trump’s tax something or another. Big doins’ on Capitol Hill! Anything to distract public attention (if any) from the $5 Trillion Washington now wastes EACH YEAR! telling lies about the Middle East, moving 7 billion incompatible foreigners into the GDP, and propping up Propaganda Broadcasting Services (PBS).
*Honk, Honk*
Arthur’s Teacher Tweaks Twink
Cartoon fans of all ages, especially those aged four to eight, rejoiced the other day to learn that Mr. Rugburn, beloved fictional Elwood Pity government school teacher, is, in fact, a homosexual. Following some of the most hateful bigotry ever displayed on children’s television - wherein Arthur and his friends assume, Nazi-style, that there’s something wrong with sibling incest - the show reverted to a so-2000s camp about their teacher “marrying” another anthropomorphic male critter.
A lower-wattage social media fan of one reporting “news” outlet, whilst celebrating the blasé wedding, wondered why Rugburn would bother inviting his young students to his wedding. Given the context and agenda, I’m surprised he didn’t invite them on the honeymoon.
*Honk, Honk*
No need to concern yourselves with anything I’ve written about here, today. Just take those special pills, sip some of that cheap, canned barley wine, and slip back into the daily coma of the telly tube.
*Honk, Honk*
*****
*Honk Honkler began making the memeable internet rounds last year, identifying and ridiculing the identifiably ridiculous. His sentiment and visage have appeared at such illustrious publications as The New York Times, InfoWars, The Mail, and “Da Chans,” along with countless inclusions with better red-pilled blogs and social media outlets. He makes his residence at his home. He was an ardent fan of Chateau Heartiste until … the demise. Shetland pony breeding is his inconvenient divertissement.
Posted by MBM at 11:45 PM