[Perrin Lovett] - An Ode to the Most Holy, Revered, August, and Eternal CORNSTERNATION of The United States Empire

***That which immediately follows is sung to the tune of “Old 100th / Praise God”***
Praise Constitution to which all taxes flow.
Praise It all ye serfs down below.
Praise It as ye lose the most.
Praise Fiat Usury and Lincoln’s Ghost!
Aaaaaaaaaaaah-Meeeeeeeen!!!*
*Deepest, most sincere apologies to Louis Bourgeois and Ken Thomas for gross doxological, melodious appropriation.
It did not come from God Almighty, the US Constitution, that is. Old 100th certainly did. But, much has been made of the Constitution, here and lately. Our esteemed editor, MB, ran a post with the text of the original version with the Bill of Rights attached. Yes, his dedicated page does contain the whole thing, complete with the other seventeen Amendments. Regardless of which version one goes with, there are some rather inconvenient facts, a few of which I will address shortly.
For this is my take on the Old Parchment. Heck, my TPC byline says I’m “into … the Constitution.” And, I am. In keeping therewith, let’s examine that document about which so much fuss is made, generally at times convenient and generally without much understanding or reflection. First, as you may have gathered, I mockingly refer to it by such nicknames as “The Cornsternation” and “The Old Parchment.” “Cornsternation,” of course, naturally proceeds from the combining of “corn” and “consternation.” The former part is nonsensical; the latter is self-explanatory. And, it is old and it’s written on some form of parchment. Second, at least I’ve seen the thing, the original straight from Madison’s quill! It resides in a museum in Washington, DC. Here it is: 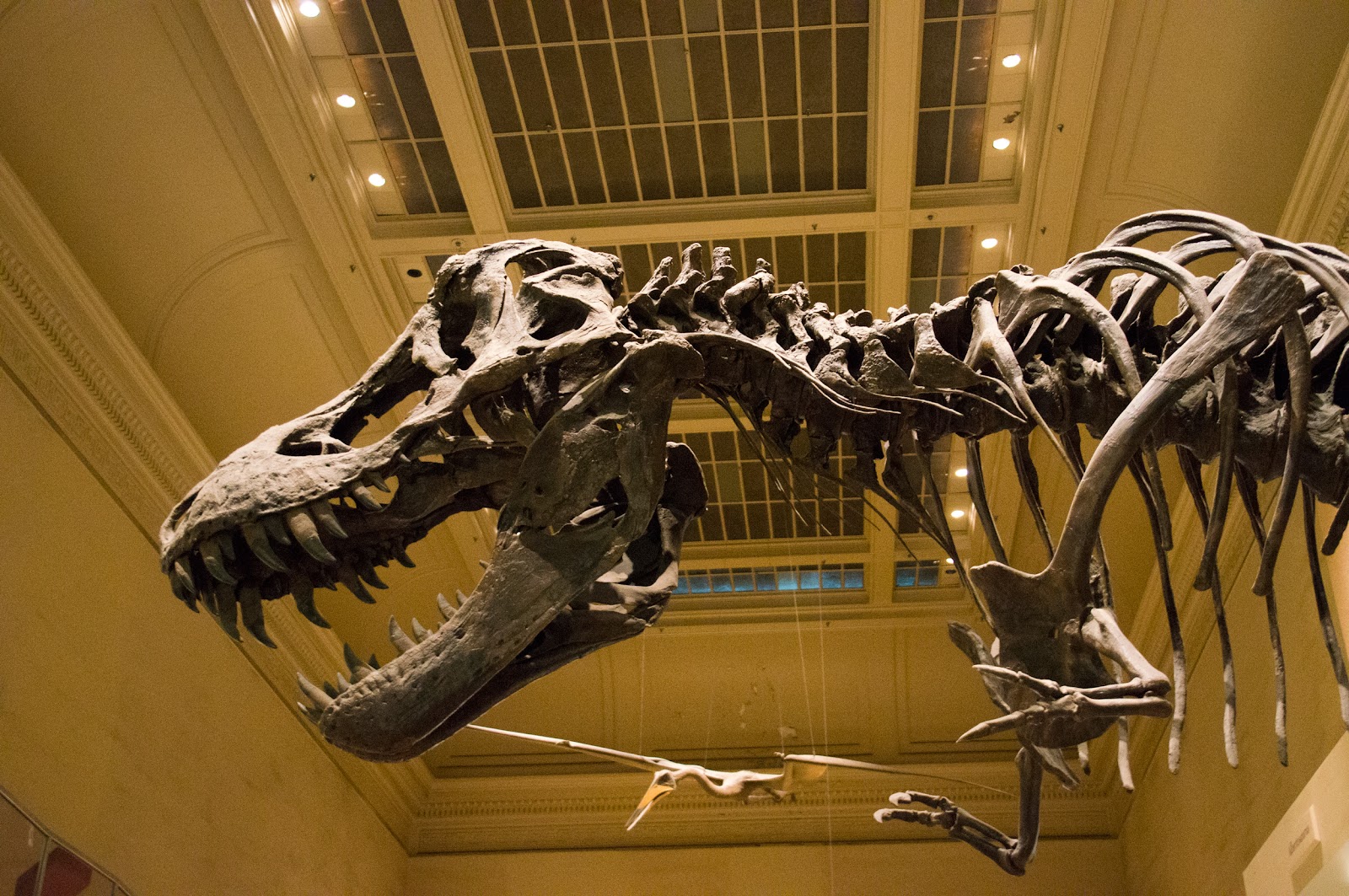 (Smithsonian Institute)
Oops. Sorry, that’s a different dinosaur from across the Mall at the Smithsonian. Here it is: 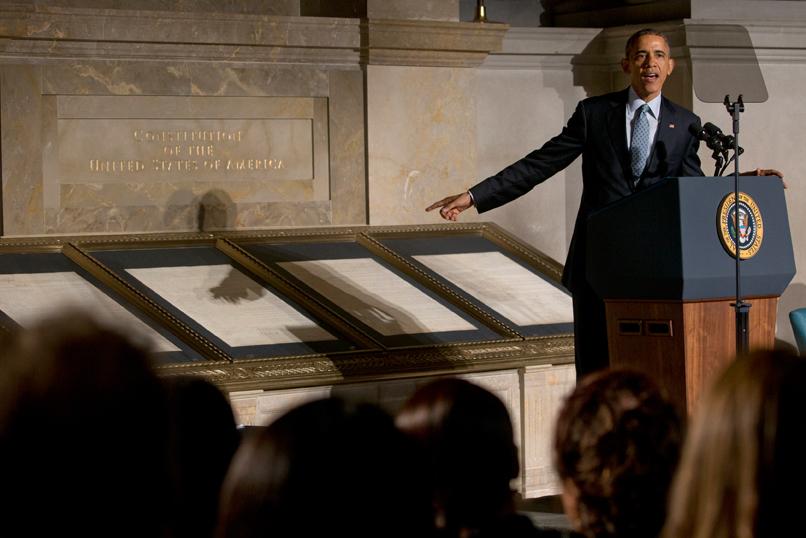 (The Daily Gazette)
Reposed in its armored sarcophagus in the rotunda of the National Archives; it’s the faded yellow thing that the wizard is pointing at while he’s lying.
People these days argue, or at least a decade or two ago argued, pointlessly, about whether the Parchment was alive or dead. Then, they argued about what they meant by alive or dead. In truth, it is utterly irrelevant. But, the best analysis ever of the Constitution is not mine or theirs, but Lysander Spooner’s:
“But whether the Constitution really be one thing, or another, this much is certain - that it has either authorized such a government as we have had, or has been powerless to prevent it. In either case it is unfit to exist.”
― No Treason: The Constitution of No Authority (1867) 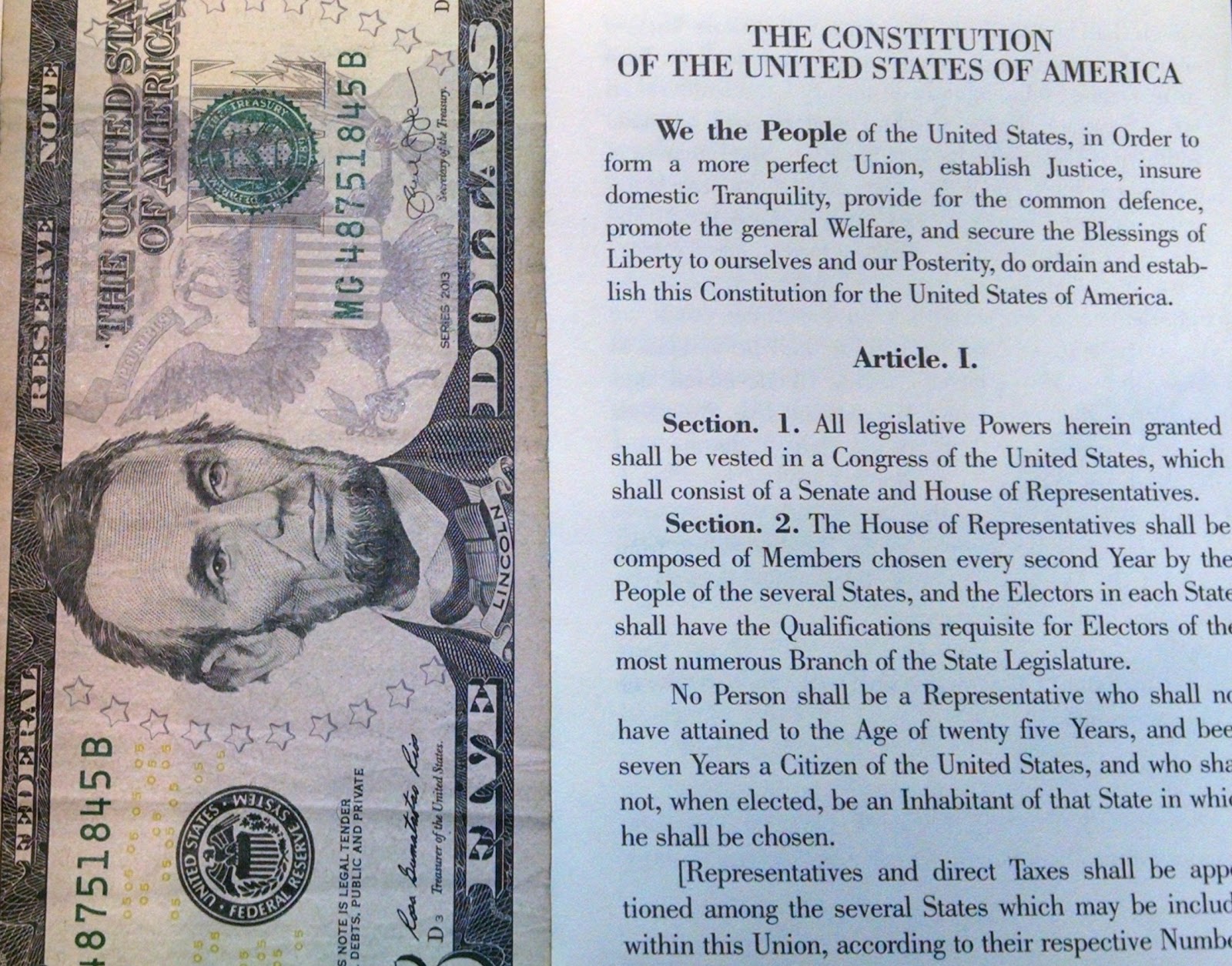 (Perrin Lovett)
Another view of a bound copy, with a headshot (Hey!) of the guy who killed two nations with one war. Note the “Federal Reserve Note” on the note; where’s that in your precious parchment?
Okay, here we go! I’m a little fuzzy on the history, but I think America was born out of Revolution and rebellion against the King of England. Something was Declared. In 1776 maybe? Then, the newly freed and independent American States confederated under some Articles in 1781. That should have been the end of it, but people love to meddle. Thus, the Constitution became effective on March 4, 1789. However, those first ten Amendments from MB’s post, as afterthoughts, were not ratified until December 15, 1791. That matters.
It matters (or, upon a time, mattered) for a number of reasons. The purpose of the Constitution, irrespective of anything else you’ve been told or might have dreamed up, was to establish a strong central government. The people who ended up leading this government said it was necessary. Go figure. One dreadful purpose - replacing the tyranny of a King on the Thames with that of a quasi-elected aristocracy on the Potomac. Mission accomplished. Any complaints one might have about the powerful centralized nature of the government owe to the fact that that was what was intended from the beginning.
And, for whom was all this intended? By the plain terms of the Preamble, it was “ourselves [the Founding Generation] and our Posterity.” At the end of the Eighteen Century, Posterity was taken to mean the now-archaic definition of succeeding familial descendants and not simply all future people. We’ve departed from that intent just a hair.
The Constitution contains many Articles, Sections, paragraphs, sentences, and words. But, it may be divided into two general parts: powers and rights. The original 1789 text and most of the subsequent Amendments were designed to establish various limited powers of the new government in the DC swamp. Today, no-one even pretends there are any limits. Cue the Star Wars Emperor screaming, “Unlimited POWER!”
The rights, again, generally added as afterthoughts, were originally taken as given points. Of course, people have the right to free expression and firearms. That’s natural law. It was, as understood by the Founders as Englishmen. An English Posterity might have held the memory, but what’s done is done. The Bill of Rights was merely a guarantee that certain existing, universally-acknowledged rights would be protected or honored by the new powerful central cabal. Ponder how well that has worked out as you attempt to purchase a modern automatic rifle (import or manufacture much?) or you insist on your right to remain secure in your persons, houses, papers, or things (DUI roadblocks, anyone?).
In short, the power of the government has grown exponentially while all of your rights have been systematically chipped away. Either authorized or else powerless to prevent…
More inconveniences. For either too-short or too-long a time, I served as an appointed Federal Defender. This entailed defending, in federal court, persons accused of violating various federal criminal statutes. I came to realize certain things. Did you know that your beloved Cornsternation sets forth only three federal crimes? It’s true. They are Counterfeiting (Art. I, Sec. 8), Piracy (Art. I, Sec. 8), and Treason (Art. III, Sec. 3). That’s it! Three crimes.
There’s also the uncomfortable language of Amendment X: “The powers not delegated to the United States by the Constitution, nor prohibited by it to the States, are reserved to the States respectively, or to the people.” “The people” don’t matter, forget them. That language means unless the States must line-item the entire U.S. Code, which would render the States as useless as they’ve become, that, criminally-speaking, the government in Washington is limited to only prosecuting piracy, counterfeiting, and treason. Oddly, those three are now almost exclusively committed by the government and associated cronies (looking at you, Federal Reserve). It also means that the thousands of other federal crimes on the books, to say nothing of the tens of thousands of regulatory “crimes” from the CFR, are illegal and null.
Try telling that to a federal judge. I have, orally in open court and by written motion. The result was always one of two things: pin-drop silence or soft laughter. Both reactions were universally followed by denials. Literally waving the Constitution around while talking about it had no noticeable effect. The courts do not care. Nor does any executive. Nor does any Congress, many members of whom admit or brag that almost nothing they do - permanent armies, coopted “welfare,” self-serving definition of “commerce,” privately sanctioned currency, legislation by agency, undeclared wars, tactic adoption of foreign law, etc. - is authorized by the Parchment. Your election protestations will not change this. Either authorized or else powerless to prevent…
From the left, we sometimes are treated to cries of “violence against the Constitution.” Sorry, but given its history, I think it can hold its own in that regard. From the right, we are admonished we “should just get back to the Constitution.” For what? So that it can authorize or fail again? From the libertarians, we hear the ideology of smoking marijuana. Yeah, and?
I could go on for another thousand words or ten thousand, but what’s the point? This thing has either done or allowed the damage sustained. The good news is that its time is rapidly running out. To the generations in charge after the dissolution, I highly recommend curbing the desire to form anything even approaching the potential power of the Unfitness to Exist of 1789. Leave it in the museum.