I visited an interstate rest area sometime within the past few months. There, I observed the philosophical wisdom of a Sharpie Sherpa. His calligraphed message was, “Jews Own You.” Not one to obsess over such advertorial import, even as vile a message of anti-Messianic, anti-American, Europhobic hate, I thought little of it - until last week. Then, someone issued a follow-up thought via Twitter. Therein, I found my suspect.
It was also not for nothing that the American administration has taken this step together with us. In recent years, we have promoted laws in most US states, which determine that strong action is to be taken against whoever tries to boycott Israel. - Hon. Benjamin Netanyahu, Prime Minister of Israel, Feb. 12, 2020


I mean, he’s already under indictment for massive corruption in his own country! Why not vandalize a rest area door in ours? Or, is it really our own? I looked into what was meant by the Graffiti, ink-based and digital.
“Most US states” means 28 out of the 50. I made mention of similar Imperial legislation last year. Ownership? If someone doesn’t necessarily own Congress and the State Houses, then they may at least have a solid lease in place, one sufficient to brag about.
Your beloved Georgia is a majority jurisdiction in this regard, having enacted SB 327 (2016), adding Section 50-5-85 to that statist’s dream known as the Official Code of Georgia.
The state shall not enter into a contract with an individual or company if the contract is related to construction or the provision of services, supplies, or information technology unless the contract includes a written certification that such individual or company is not currently engaged in, and agrees for the duration of the contract not to engage in, a boycott of Israel.

There was something - I forget exactly what - in the Old Cornsternation, which forbade “abridging the freedom of speech.” Or something. It’s fuzzy. Something was said to be incorporated as to and against the States. I haven’t visited the museum in a while, sorry.
Oh yeah! Georgia, like too many other corrupt states, has imposed a loyalty oath to a foreign power, in plain contravention of the rights and freedoms of the American People. Exactly what one would expect from a band of craven con artists and idiots. (A gentle reminder: you did vote for them).
The manifestation of this abridgment looks like the following, taken from deep in a Georgia Tech procurement contract:
41. Boycott Nonparticipation Certification. Contractor hereby certifies that Contractor is not currently engaged in, and agrees for the duration of The Purchase Order not to engage in, a boycott of Israel as defined in O.C.G.A. 50-5-85(a)(1). [Terms and Conditions, Dec. 2019, Page 23]
The terms and conditions are much the same for other educational establishments. A potential speaker found out about it the hard way at Georgia Southern. Abby Martin is a filmmaker who documented the living conditions of Palestinians in Gaza, conditions which led to (symbolic) Convictions for Genocide, pursuant to the Nuremberg standards (minus the original torture and lack of due process), and which Human Rights Watch calls “severe and discriminatory” in violation of various international conventions. Perhaps something to boycott? We’re still not sure, exactly, as Martin never had the chance to express her freedom of speech. She was barred from speaking at Southern by the above illegal, anti-First Amendment law.
Not one to play dead like an establishment Republican, Martin is suing the University and the Georgia Board of Regents in federal court. READ HER IRON-CLAD COMPLAINT. Quoth the Petition:


The First Amendment protects the rights of all speakers to advocate for all viewpoints on issues of public concern. “If there is any fixed star in our constitutional constellation, it is that no official, high or petty, can prescribe what shall be orthodox in politics, nationalism, religion, or other matters of opinion or force citizens to confess by word or act their faith therein.” West Virginia State Bd. of Educ. v. Barnette, 319 U.S. 624, 642 (1943).

Yes, the Gold Dome hosts a horde of petty officials. Most don’t know what a constellation is though most nonetheless live to force things on the citizens. Martin will win. She will obtain both the injunction and the declaration she’s after, and her damages, and attorney’s fees. This brand of law has been declared Unconstitutional in Texas and will also be crushed in Georgia - at your expense (here again, you did elect these fools - next time, maybe vote harder?). You’ll be billed for her expenses and those of the AG’s office in losing this ridiculous fight. I’ll peg it early at around $500,000 - just an estimate.
As a cogent aside, her Complaint, seeking relief for violations of the First and Fourteenth Amendments, is brought pursuant to 42 U.S.C. § 1983, originally and colloquially known as the Ku Klux Klan Act, being formerly enacted to combat discrimination in places like Georgia. The more things change…
Again, the great and readily preventable shame of this legal matter is that the subject illegal law was enacted at the behest of a foreign power for the express purpose of curtailing the liberties of Americans. Now, for no reason whatsoever, I throw out the following two links:
Link One
Link Two
Just linkin’, yo.
Is it really in the best interests of Israel as a State to give even the appearance of manipulating the laws of another sovereign nation? For the Israeli people, certainly not; for the elected elite, it appears to be a gamble they’re willing to take. Is it in the best interests of American politicians, however stupid, to enact such rubbish? Dunno - and, in their defense (true devil’s advocacy), they may have thought that “BDS” meant “Bringing Depot Scrutiny.” If you’ve ever hung out with the General(ly useless) Assembly gang, then you know. Know also that none of this is in the interests of Americans.
So, in closing, and for morality’s sake, should you see Benjamin Netanyahu at a rest area, with or without a writing instrument, then please call the police.
*Today’s CFF National Affairs column proudly brought to you by:
THE FIRST AMENDMENT*
*currently unavailable in some areas.
-and by- 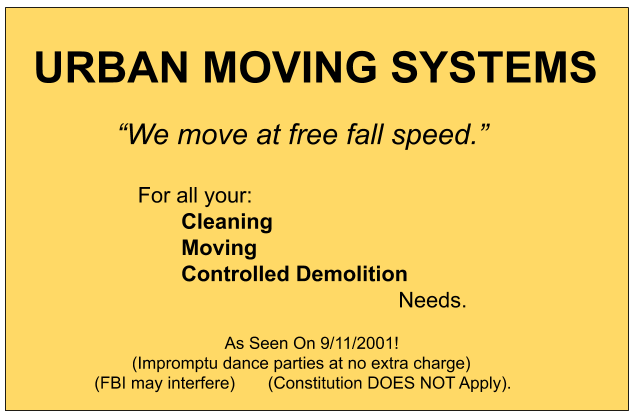 Keep up with Perrin's regular thoughts & analysis on national affairs at his eponymous site.
Posted by MBM at 3:30 PM