[Perrin Lovett] - PERRIN’S Music Minute! - Or, As Musical As We Can Get The National Affairs -

Warning! This one may wander all over the place like a glaucomic old man ensconced behind the wheel of a gracefully-aging Fleetwood. Feel free to sing along.


So! One thing led to another and last week I came across a superb edition, extended and rare, of a 1983 Berlin song. Thinking about it now, I can’t ever remember hearing Masquerade played on the radio (if it happened, it was campus rock radio back in ‘83); still, for my money, it’s some of the band’s best work, perhaps my favorite. For those who either remember or who never knew, please click that link and listen. The magnificent intersection of new wave and rock comes in hard around 6:19 with a rolling, pounding guitar riff which mingles perfectly with the lasting general melody, which itself is upbeat if thought-provoking - bordering on somber at intervals. (Note: MB actually plays and understands the music, PL merely rambles…)


The tune is about, so far as I can tell, the shattered dreams and hopes of aging or failed actors of the screen or the stage. The business, regarded with suspicion since ancient times, has a reputation for being rather harsh on potential talent. The lyrics speak to that darker side of entertainment, hauntingly and beautifully. The refrain is what landed the song at TPC this week:


♭
When you hear the price they paid,
I'm sure you'll come and join the masquerade...
♭


I’m no expert, but I take that to mean that, despite everyone knowing how Hollywood, Broadway, etc. chew people up like hor d'oeuvres at a Harvey Weinstein party, people still keep patronizing the shows, with many intrepidly venturing into the fray, hopeful of professional success.


And, that is exactly the same kind of circus spectacle we witnessed in Iowa last week with the 2020 Hawkeye Cauc-eye: those zany Democrats and their presidential show. With my only paying nominal attention to practical politics and with November’s outcome being as clear as the recent Impeachment trial outcome, I devoted maybe .2% of my energies to analyzing what happened. Is “trainwreck” the word I’m looking for?


Seriously, we may never know what happened with the voting. I think each of the candidates, with or without factual basis, has claimed a win. You’re all winners, kids! LOL. And the circus tent later appeared on schedule in New Hampshire. (Speaking of, a new CFF sponsor appears at the end). Mass voting was a mistake. Mass voting via electronic devices was a bigger mistake. Leaving the design of the electronic mass voting devices to community activists possessed of programming skills to rival my musical abilities was an even bigger mistake. You get what you pay for.


Whatever the price paid for this particular masquerade, it is patently obvious that the DNC will no more allow Bernie’s campaign to succeed in 2020 than they did in 2016. Sorry, bros, it ain’t happening. Who’s that leave? I still think it’s Warren, though Creepy Joe, the gay CIA plant, the soda taxer, and others are still hanging tough - for now. Dark horses also lurk, darkly. None of them can beat Trump. But, that’s not the point.


The point is that Terri Nunn is une déesse ravissante.


Beyond that, people seem confused, Democratic voters especially. Folks! These caucuses and primaries are rigged by the parties from the get-go. Ask someone who’s been to a state convention and seen the backroom BS in play. The people who claim they want the general election decided by the popular vote, won’t stand for the same mechanism when choosing their candidate. It’s about the party and the major donors - in both the DNC and the RNC. Your feeble votes do not count. I mean that literally and from end-to-end.


Back when I used to vote, I found out the painful way how the corrupt State of Georgia practices the black art of democracy. In 2012, finding Mittens to be the kind of idiot who would do something like being the only Senator to ever vote against a President from his own party, I did what I was prone to do - I wrote in Ron Paul as my choice for the White House. As it happened I was near to the board of elections a day or two after Obama’s second victory and I inquired as to how many votes Paul received in Columbia County. “Zero,” the woman answered. I protested and she quoted to me the law, which I later double-checked. Sure enough, in Georgia as in most other criminal cabal jurisdictions, write-ins have to be “official” in order to count. A stand-alone does not.  I should have known that then; I remember it now. Who determines what’s official? Why, the Democrats and Republicans. Rigged. System. Why even have the option on the rigged little electronic devices?


I can’t understand how Bernie, Biden, or any official or voter can even pretend to be offended or surprised by Iowa. But, they say they are: “Experts are worried the Iowa debacle could threaten the legitimacy of the entire process.” Had there been any legitimacy, to begin with, that would be a reasonable concern.


The hell with it. I look forward to more worries and failed acts between now and November. At least I’ll have something to fall back on, writing-wise, should the Music Minute takeover fail.


And, now, a word from our new sponsor:


Life happens … even the unthinkable.
What would your family do without you and your income?
Where would you live after a home fire?
Could you replace your vehicle after an accident?
It’s time to think about life. Larry Ironsides can help you plan ahead.
Call him and his team for all your insurance needs. Schedule a visit today. 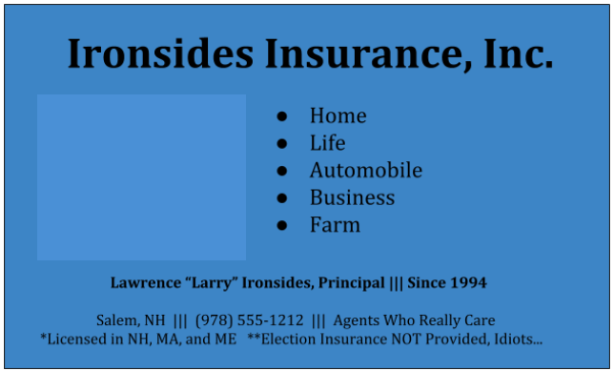 *Next week, we examine the opium epidemic through the lens of Rock You Like a Hurricane by The Scorpions.