A 50% INCREASE
The rate of US teenagers committing suicide has reached its highest level in two decades. In 2017, there were nearly 50% more suicides among teenagers than in 2000.
Suicide is the second-leading cause of death for those between the ages of 15 and 24.
Second only to car accidents.
EMOTIONAL SCARS
Bullying can leave children with more than physical bruises. The emotional impact can last years and cause serious mental health issues, like depression.
Bullying and depression do go hand in hand.
Bullying can occur anywhere, including at the workplace for adults. However, for this discussion, we will focus on youth bullying and its tragic consequences.
The internet and social media gave bullies a new way to torment. They take full advantage of the medium. 59% of all US teenagers acknowledge being bullied online.
The physical injury sustained from bullying will eventually heal, but the emotional scars are what do the most damage. Depression is one such consequence. Teenagers who are physically and verbally bullied are at greater risk of developing depression. Depression, in certain instances, can lead to suicide.
As a parent, this is heartbreaking. I witnessed it firsthand with my youngest daughter, while she was enrolled at a public high school. The bullying got so bad, my wife and I withdrew her from school and enrolled her in a private academy. We struggle financially to cover the cost of tuition, but her mental health is far more important. At the peak of the bullying, during her sophomore year, her mental health took a turn for the worse. She entered counseling and was treated for depression. Once removed from the school, the process of healing began. My daughter is now doing well and on track to graduate high school one year early. Hers is a story of success. Others are not so fortunate.
THE NEXT STEP
Healing begins with having an honest conversation about bullying, depression, and suicide. Headlines like “Young person’s suicide linked to bullying” must serve as a wakeup call.
The pain and suffering associated with these headlines, impacts not only the individual families, but their entire community. The issue needs to be addressed holistically.
School administrators, teachers, and staff counselors, the ones in contact with children daily, along with their parents, must continue to work together as partners and communicate any observed symptoms of depression or suicidal behavior.
BULLYING, DEFINED
Bullying is unwanted, destructive behavior that involves a real or perceived imbalance of power. It is an act repeated over time. It includes making threats, spreading rumors, attacking someone physically or verbally, and excluding one from a group based on race, religion, or sexual orientation.
It is worth noting, the signs and symptoms of depression or suicidal behavior can be observed in the bully, the direct recipient of their abuse, or a witness.
Identified signs and symptoms:
Feelings of helplessness, anxiety, loss of energy, decreased interpersonal relationships with friends, poor school performance, poor attendance, loss of appetite, low self-esteem, unusual physical illness, irritability, outbursts of crying and anger, changes in sleeping habits, inability to focus, and unexplained mood swings.
POORER COMMUNITIES
Families living in poorer communities like Newton County, can experience additional barriers to receiving mental health treatment. One of the primary barriers is lack of health insurance. There is also a limited number of mental health providers under employer insurance plans, making it harder to access treatment at a reduced cost. Families living in poorer communities and rural areas typically travel greater distances to access mental health care. Mental health services may require multiple visits prior to a diagnosis and treatment, which is difficult for families who can't afford to make multiple doctor’s visits during normal business hours.
STIGMA
Stigma is another barrier. People suffering from depression in poorer communities not only experience the stigma surrounding mental health issues, but also that of living in poverty. Americans who live at or below the poverty line, are 20% more likely to experience mental health issues.
THE FRIENDSHIP BENCH 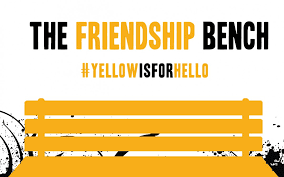 The Friendship Bench program started in Zimbabwe to address depression. A Friendship Bench is literally a park bench. They are places where trained community members sit and listen to those struggling with depression.
The program was founded in 2006 by Dr. Dixon Chibanda, a psychiatrist at the University of Zimbabwe. In Zimbabwe, like the US, there is stigma surrounding mental health.
Chibanda identified a problem and pioneered a rather simple, yet, groundbreaking solution. After speaking with community leaders and health care professionals, he discovered people were willing to speak about depression, but not in a clinical setting with a stranger. He found individuals were more open to talk on a bench, with someone from their own community.
On these benches, trained community counselors and individuals meet to discuss on-going mental health issues.
Chibanda’s strategy proved effective.
He began a six-month study of nearly 600 patients who displayed symptoms of depression. Half received standard clinical care, to include traditional counseling and prescribed medications. The other half met and spoke with a community member on a Friendship Bench.
At the end of his study, the half who received standard care still displayed symptoms of depression. Of those participants who met on a Friendship Bench, only 13% displayed symptoms.
Most Friendship Bench counselors are older, grandmotherly women, who volunteer their time. They require training and supervision but are not doctors or licensed social workers.
The Friendship Bench program was expanded throughout Zimbabwe. Over 27,000 people suffering from depression have tried the therapy.
The Zimbabwe model has been adopted in Canada, following the suicide of Lucas Fiorella. He silently suffered from depression for over 8 years before taking his own life in 2014.
The Canadian program, founded by his father, uses 100% volunteer staff to work with a school’s faculty. They partner with community businesses to raise money for the benches.  The benches are yellow and installed at schools and playgrounds. There is a sign on each bench with their website, www.yellowisforhello.org, along with the hashtag, #YellowIsForHello, which connects students through social media platforms.
As of date, there are no Friendship Bench programs in Georgia.
TRAGEDY
Recently, two local teenagers committed suicide. I do not know their families. My youngest daughter shares mutual friends with the victims. It has not been discussed publicly, only whispered about privately, that mental health issues and bullying may have been involved factors.
It’s time to have an uncomfortable conversation with our children.
ADDITIONAL RESOURCES
www.namiga.org (National Alliance on Mental Illness – Georgia)
The National Suicide Prevention Lifeline: 1-800-273-8255, is open 24 hours a day, seven days a week.